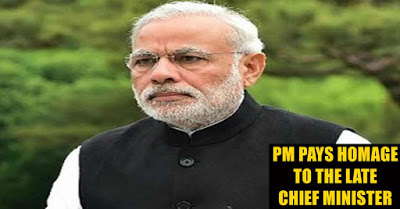 Prime Minister Narendra Modi paid his last respect to the deceased Chief Minister Selvi Jayalalitha who passed away on December 5 and is now being laid down for public mourning at the Rajaji Hall.

Clad in a white kurta and trousers the Prime Minister flew to Chennai in his private Air India One flight and was received by the Governor Vidyasagar Rao at the Chennai airport.

He was then taken to INS Adyar by a helicopter after which he reached Rajaji Hall via road where Jayalalitha’s body is kept for public mourning.

The Prime Minister earlier paid his condolences via Twitter.

I will always cherish the innumerable occasions when I had the opportunity to interact with Jayalalithaa ji. May her soul rest in peace.

Deeply saddened at the passing away of Selvi Jayalalithaa. Her demise has left a huge void in Indian politics.

Earlier the flight which had The President Pranab Mukherjee returned to Delhi owing to some technical issues. He’d be escorted in another flight to Chennai where he’d follow the same routine as the Prime Minister in paying homage to the Chief Minister.

Celebrities Mourning At The Death Of The Chief Minister. Here’s A Look At Their Tweets.
Who Was This Mystery Person Who Did The Last Rites For Amma Along With Sasikala?