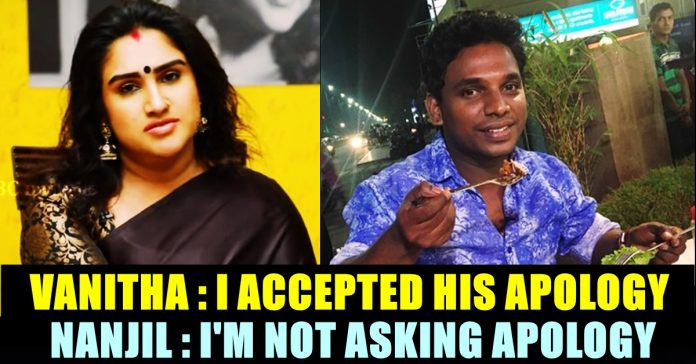 Nanjil Vijayan joined the gang of Kasthuri, Lakshmi Ramakrishnan and Producer Ravinder after his name brought into the issue by the lawyer of Vanitha Vijayakumar in front of media. He was seen making videos against Vanitha Vijayakumar, blaming her alleged marriage with Peter Paul, an aspiring filmmaker. In that Press meet, Vanitha’s Lawyer Sridhar said “Vijay TV fame Nanjil Vijayan is the mastermind behind all these” while talking about Suriya devi constantly defaming Vanitha.

Lately, Vanitha Vijayakumar came up with a series of tweets saying that Nanjil Vijayan explained everything to her and asked apologize. Vanitha said that Suriya Devi is main culprit and Kasthuri misused the situation by bringing Nanjil Vijayan into the picture. “He felt bad that he put abusive public opinion videos about me in his channel. He explained he was angry since I had complained about him in a case he was not related to.some middle people have played a game bringing him in to the picture. I accepted his apology since I felt he was unnecessarily dragged into the matter and he is a young talent and does not need controversies hanging around him in his growing stage.i also feel bad that if he is really innocent he shouldn’t have been blamed.” said Vanitha in her tweet.

The picture and making him talk in her live etc etc.he felt bad that he put abusive public opinion videos about me in his channel. He explained he was angry since I had complained about him in a case he was not related to.some middle people have played a game bringing him in to

But I expressed to him that I wasn't happy about his videos he promised to remove all of it and clarify the same with a video in his channel.this shows when two people have a problem it has to be dealt with directly when a 3rd person enters that is when it goes out of

Now, after two days, Nanjil Vijayan came up with a tweet saying that he never asked apologize to Vanitha. “I just tried to make you understand few things but you thought I asked apology. I feel pity for you, be ready to face many more problems that you are going to face in your life” he said in his tweet.

In this tweet, a follower said to Kasthuri not to believe Nanjil Vijayan. Kasthuri replied to this tweet by writing “In my experience, vanita madam sonnathula poithaan athigam. She is a pathological liar.”

Here’s how Vanitha reacted to this tweet of Kasthuri :

Even when we dont care about ourselves..some people cant stop thinking about us..SAD..OBSESSED…they really are pathetic…LIFE LESS ..seriously DESPERATE ..feeling so blessed

“Most Asked Question” – Actress Replied To A Follower Who Asked About Her “B**b Size”!!

Actress Chandhini Tamilarasan who predominantly works in Tamil films and serials, in a recent question and answer session she conducted, responded to a follower...