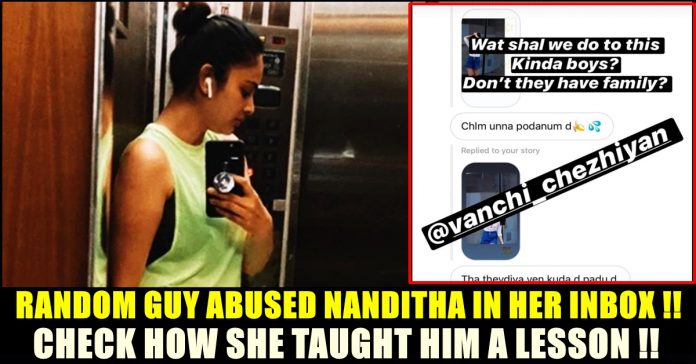 Actress Nanditha is known among Tamil audience for her appearance in films like Attakathi and Puli. Some of her notable performance took place in movies like Ethir Neechal, Idharku Thaane Aasaipattai Balakumara, Mundasupatti etc. The actress who is busy in acting movies is also getting herself engaged in social media platforms, especially in the photo posting social media app, Instagram.

Having more than 4 lakh followers, Nanditha never missed to update her followers about her daily routine. Starting from her Gym workout pictures to the pictures from her photoshoots, Nanditha is very much involved in letting her followers know about her routines. Check out some of her posts below :

As we all know Social media don’t know the value of the emotions expressed by the celebrities in online medium. Many high profile celebrities got trolled and abused by random social media users in daily basis. Some would post their pictures and would never turn back to it due to the intolerance of abusive comments where the others would give them back right away.

Sharing the screenshot, Nanditha wrote “What shall we do to this kind of boys ?? Don’t they have family ?” in her story.

It is high time for social media users to think twice before sending such texts instead of deleting their account later. On the work front, Nanditha is all set to appear in “Taana” in which she is going to pair with actor Vaibhav. Well, the Nanditha has dealt him the way he deserves, ain’t she ?? Comment your views below !!

Previous articleNayanthara Rejected “Paiyaa” For This Reason !! WATCH !!
Next articleActress Kissed By Fan In Public !! Check Her Reaction !!

Producer K Rajan who is known for his controversial speeches against actors and directors, in a recent event that took place for an upcoming...