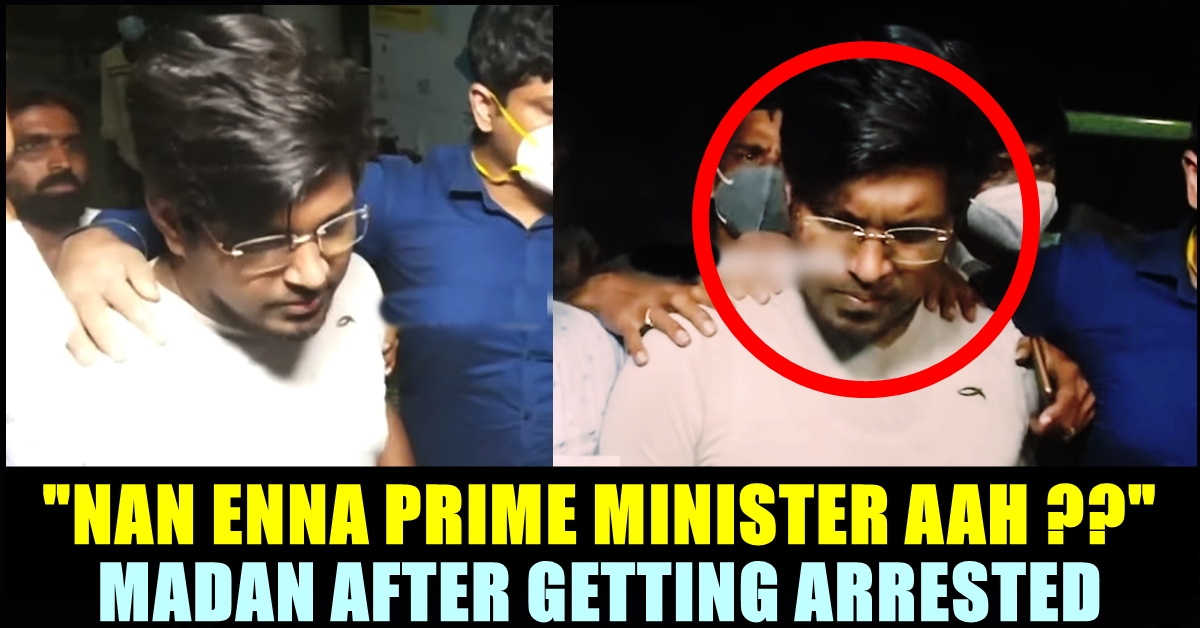 Video of Madan being brought to Chennai surfaced in the news channels of Tamil nadu. The viral video shows reporters of various media channels clicking pictures of Madan and asking him to pose for their cameras. After posing to several media channels, Madan who looks tired and disturbed, at one point, asks “Am I a Prime minister or what ?” to one of the reporters who was present there.

Madan who got arrested at Dharmapuri was brought to Chennai Commissioner Office at the evening of Friday. After arresting Madan, Police kept him in his Salem house and investigated him, says the recent report. Police have confiscated proofs such as Tablets, Drone camera etc. He reportedly played PubG through the tab.

Reports emerged saying that Madan of PUBG fame begged police to forgive him while getting arrested at Dharmapuri. Earlier, Madan, through his youtube channel, said that these kind of legal cases wouldn’t affect him and said that his leading, expensive lawyers will take care of all the issues. Now, while getting arrested, Madan begged police to leave him alone, said the Police officials.

“When the players of PUBG searched for PUBG related videos to win certain challenges, Madan’s videos popped up in large number as he had uploaded so many videos. Followers started increasing for Madan and Krithika got introduced to Madan through his social media handles. They became friends with the connection of their native Salem and turned lovers after few months. The duo eloped after facing problems with their parents accepting their relationship. ” he further added.

Madan used the bank account of Krithika and currently her account contains Rs. 4 crore of money” the official said. It is reported that most of the revenue they generated came from the donors comparing to the youtube income. He reportedly cheated his subscribers saying that he is going to help the poor and needy.

Police found that Madan provided money to the people who lauded him during live streaming. Madan has confessed about his crimes and revealed some names, says the recent report of Vikatan. “Audi Car, iPad, Tablet were confiscated from Madan. His asset value is being investigated” the police official added. Madan fell on the feet of Police officials and begged them to forgive him for manipulating children by using obscene language when Police entered his relative’s house in Dharmapuri.

Police doubts that he could have cheated his subscribers financially in the pretext of donating poor and needy. Investigations regarding the same is expected to take place. Now, a latest video that is doing rounds shows, Madan being accompanied by police officials to Commissioner office. After seeing reporters clicking several pictures of him in different angles, Madan, slowly asked “Am I a Prime minister ?” to one of the reporter. In reply, a police official who was standing beside him could be heard saying “Accused Vaa . . “ ( You are an accused, come) before slapping him in the back of his head.