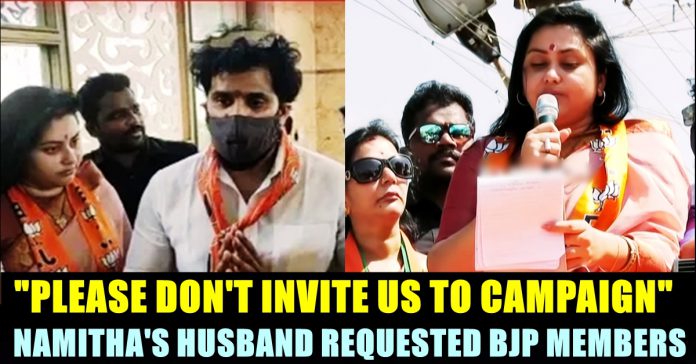 During July month of 2020, BJP party appointed actress Namitha as one of the state executive members. She had joined the party in the presence of BJP president JP Nadda during his maiden visit to the state in November 2019. She who married her boy friend Veerendra in the year 2017, is currently involved in campaigning for her party ahead of the Tamil nadu assembly elections which is scheduled to take place on 6th of April. Now, a video of the actress turned politician’s husband asking BJP members not to call his wife for campaign due to the continuous absence of candidates, is going viral in social media platforms.

While influencing people at the Ramanathapuram constituency to make them vote for BJP, Namitha left the campaign in midway due to the absence of the candidate and her husband requested the BJP authorities not to call them for campaign again, says the report of Polimer.

On 31st of March, at the Ramanathapuram constituency, Namitha was supposed to take part in campaigning for the area’s candidate Kuppuram in four places. At the Maruthupandiyar statue where she was about to campaign at 9 AM in the morning, Namitha cancelled it due to Kuppuram’s absence and made her speech at the second place. Despite of Kuppram’s absence, Namitha made speech listing out Modi’s good deeds to the fishermen.

However, Kuppuram didn’t make his presence at Rameshwaram bus stand as well. Disappointed Namitha, cancelled her campaign and returned to the hotel she is staying. Members of BJP party reached her hotel and invited her to campaign at Ramanathapuram area.

At that time, Namitha’s husband Veerendra Chowthry requested the BJP members not to call them without candidates. “Don’t call us without candidates, we are leaving to Chennai” he said with folded hands, according to Polimer news channel.

In Tamil, Namitha was last seen in a film named “Pottu” and also participated in the season one of Kamal Haasan hosting Bigg Boss show. She stayed in the house for 28 days and got evicted due to the less number of votes she received from the followers of the show.

Previous articleVideo Of Kamal Haasan Throwing His Symbol Torchlight Away Goes Viral !!
Next articleShivangi Got Emotional While Recollecting The Trolls She Faced In The Past !! Check Pavithra’s Message To Her

Kanakuntla Rajitha, a 24 year old woman who belongs to Kundaram Village in Mancherial district of Telangana, died while undergoing treatment in a hospital...