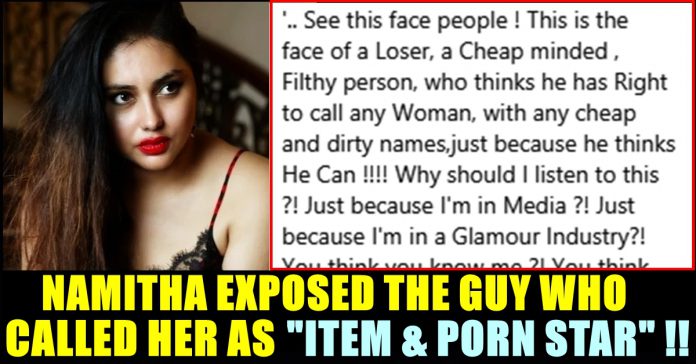 Namitha is one of the most popular actresses among 90’s kids as she was very much active in Tamil film industry during mid 2000’s. Having shared screen space with both Vijay and Ajith in Azhagiya Tamizh magan and Billa respectively, Namitha also took part in the Tamil reality show “Bigg Boss show” which is being hosted by Ulaganayagan Kamal Haasan.

Exposing his face and named, Namitha said that he started his conversation by calling her as “Item”. The guy reportedly lied that his account got hacked when the actress confronted. “Why should I listen to this ?! Just because I’m in Media ?! Just because I’m in a Glamour Industry?! You think you know me ?! You think you know who I’m as a person ??! DO NOT MISTAKE MY SILENCE FOR MY WEAKNESS !!” Namitha wrote in the caption.

Hi all, this one cheap minded, free loser has been calling me names in DM. As you can read he is @i_am_thamizh_senthamizh . He started with name calling like 'Hi Item' . Hence , when I confronted him , he said his account got hacked !!! And when I pursued him, he said he has seen my so called 'PORN' and he's going to publish it online now !!! Knowing the facts, I said pls 'Go ahead '.. See this face people ! This is the face of a Loser, a Cheap minded , Filthy person, who thinks he has Right to call any Woman, with any cheap and dirty names,just because he thinks He Can !!!! Why should I listen to this ?! Just because I'm in Media ?! Just because I'm in a Glamour Industry?! You think you know me ?! You think you know who I'm as a person ??! DO NOT MISTAKE MY SILENCE FOR MY WEAKNESS !! A Real Man knows how to Respect a Woman, Any Woman from Any path of Life, for he knows how it feels if someone will Disrespect his own Mother! Instead of Celebrating Navratri where you pray to Godess Durga for 9 days and instead of Celebrating Women's Day, learn to respect women in your General Life. Because that's what matters at the End of the Day!!

Internet abuse is something which is being faced by almost every celebrity in the world in daily basis. Some won’t mind and react to the abusive texts they are receiving but some will get offended and give it back to the vicious personalities right away. What do you think on Namitha exposing the face of this guy ?? Comment your views below !!

Previous article“Give A Refund” VJ Anjana Slammed Make My Trip For This Reason !!
Next articlePeople Laughed At This Tamil Actress For Wearing Mask To Be Safe !!

For the first ever time in the history, a Video of a Traffic police shedding tears in front of people not to roam around...