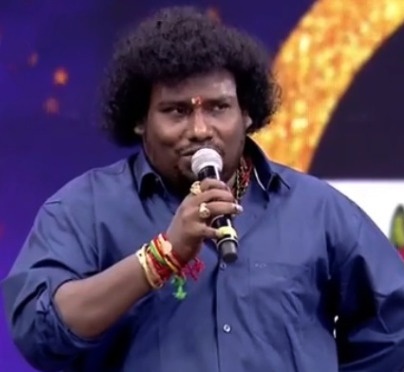 Yogi Babu alerted his fans for the second time after a poster of an upcoming film named “Dhadha” released with his poster. The “Love Today” actor said that the hero of the film is not him but Nithin Sathya and asked his fans not to believe. It is notable that the actor made similar announcement three months ago.

After appearing as a junior artist in “LolluSabha”, a spoof program, Yogi Babu worked hard to get a place for himself in Tamil cinema. By doing minor roles in films, the actor got his face recognized and went on to do pivotal roles as a comedian.

His first major breakthrough came from a film named ” Maan Karate” of Sivakarthikeyan and some of his notable works includes “Yamiruka Bayamey”, “Kaaka muttai” etc. “Kolamavu Kokila” of Nayanthara gained Yogi Babu a hero status and the actor’s film as a solo lead “Mandela” became one of the most talked about, widely appreciated film.

Babu acted with all top tier actors including Rajinikanth, Vijay and Ajith in his Kollywood career which spans a long time. Most lately, his performance in “Love Today” movie gained him much accolades from the fans. On Monday evening, the actor shared a poster of “Dhadha” that featured him saying that Nithin Sathyaa is the hero of the film and said that he just acted as his friend. He also asked his fans not to believe it.

Three months ago, Yogi Babu shared a first look poster of “Dada” which featured a picture of himself holding a gun. The actor didn’t share the poster to promote the film but to request the makers not to misuse his picture to promote the film.

Previous articleSamantha Removed Her Pictures With Chay After This One Of Him Got Leaked ??
Next articleJanany Got Thrashed For Her Insensitive Comment On Rachitha !!