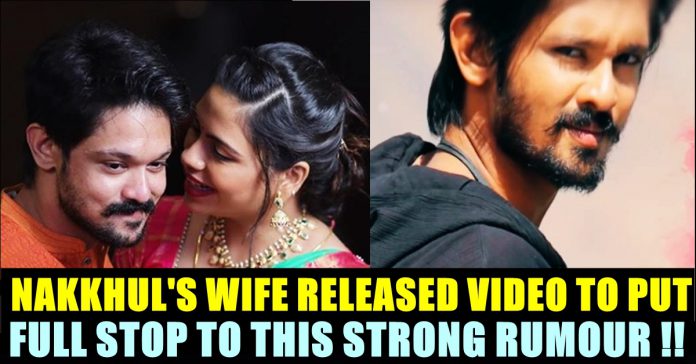 Nakkhul’s Wife Gives A Sharp Reply To Shut Down The Rumours About Her Personal Life !!

Earlier Sruthi, wife of actor Nakkhul has slammed people who criticized her for being taller than her husband. Actor Nakhul’s Wife Shuts Down All The Trolls Which Criticized Her Height !! Here’s How Nakkhul Reacted !! Now the couple again cleared the air on a rumour about them having a child on one and half years age.

The recent post shared by Nakkhul and his wife shows them giving a clarification on the rumour spread by several media houses. The rumour which is based on a photograph of Nakkhul and his wife with a child said that the couple had given birth to him over a year ago. Nakkhul who completely denied the news, said that the child they carried in the photograph is his nephew.

“Though he is like my son, he is my brother’s son. The only child I have as of now is Sruthi” said the “Vallinam” actor. On sharing the video, Nakkhul’s wife, in her official Instagram account wrote “We had posted this over a year ago and still , we got people writing the same fake news ! So here you go ! Reposting it again for you guys ! 😛”

Check out the video posted by the couple here :

We had posted this over a year ago and still , we got people writing the same fake news ! So here you go ! Reposting it again for you guys ! 😛 #Repost @actornakkhul with @get_repost ・・・ Recently I read a news that @srubee & I have a Year old kutty papa and they also posted a pic. Well here is the answer 😁 #homemadewithlove #clarifications #wifelife @iam.mayuur @freespirit_soods 😍

Nakkhul who was last seen in a thriller film “Sei”, is expected to appear in “Eriyum Kannadi”. Nakkhul was 18 when he was chosen for the part of Juju in Shankar’s coming-of-age film Boys. His family had initially sent some pictures of his elder brother Mayur to Shankar’s office, but after seeing Nakkhul in one of the pictures, Shankar approached him to portray a leading role alongside an ensemble cast of newcomers.

After the pictures and videos of herself partying with her friends at home got leaked in social media platforms, Sanna Marin, Prime minister of...