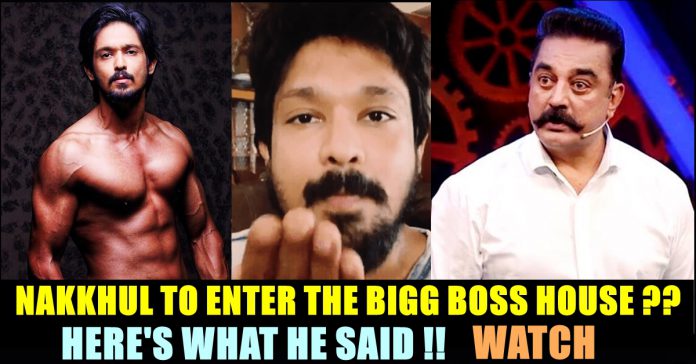 Actor Nakkhul came up with a video in his official Instagram account to clear the air on his participation in the upcoming season of Bigg Boss season five. The actor appeared with his newly born child in his Instagram story and said that he hasn’t got approached by the makers of Bigg Boss to take part in the show yet and is not ready to live 100 long days without his child whom he mentioned as his “Thangam”.

Days after the reports on the change of host for the season 5 of Tamil Bigg Boss surfaced, a buzz on actor Nakkhul getting participated in the show as a contestant did rounds in the social media platforms. Along with him, a number of names of the celebrities including Poonam Bajwa, Pavithra Lakshmi, “Cooku with Comali” fame Ashwin were listed as the celebrities who got approached by the Bigg Boss management.

Nakkhul who debuted through Shankar’s “Boys”, made his debut as hero through “Kadhalil Vizhunthen”. The song “Adra Adra Naaka Mukka” which took place in the film gained him the fame among the fans of Tamil cinema. He went on to act in a number of films including “Maasilamani”, “Naan Raajavagha Poguren”, “Vallinam”, “Tamizhukku enn ondrai Azhuthavum” etc. He also worked as a playback singer in films, notably recording for Harris Jayaraj in his albums for Anniyan, Ghajini and Vettaiyaadu Vilaiyaadu.

The actor got married to his long time girl friend Sruthi Baskar in the year 2016. His wife and him are known for making videos together on their Instagram handles which is receiving positive response from the followers of their handles. On 2nd August 2020, Sruthi gave birth to their first child a baby girl and named her Akira and pet named her Khulbee.

Now as the season 5 of the reality game show, hosted by Kamal Haasan is approaching, a strong buzz on his participation gained the actor’s attention. Unlike other celebrities who would keep mum about such rumours to make people talk about them, Nakkhul immediately came up with a video right to clear the air on his participation.

Having Akhira on his chest, Nakkhul, in a husky voice said “I have been receiving posters regarding my participation on Bigg Boss season 5, I haven’t received such approach till now. Even if they approach, I wouldn’t go leaving my Gold here” he said mentioning his sleeping child.

The actor who was last seen in a 2018 flick named “Sei” is pretty much active in social media platforms nowadays. His upcoming film “Eriyum Kannadi” is expected to hit the screens soon. As far as Bigg Boss season 5 is concerned, the 100 days show is expected to inaugurate on the 1st week of June.

Comment your views on this cutest response of the actor !!

Previous articleCelebrities Can’t Keep Calm After The Announcement Of National Awards !!
Next articleVishnu Vishal Got Emotional While Talking About Soori Controversy !! WATCH

On Friday, the AIADMK led Tamil nadu government has announced waiver of Rs. 12, 110 crore farm loans that was received by 16.43 lakh...