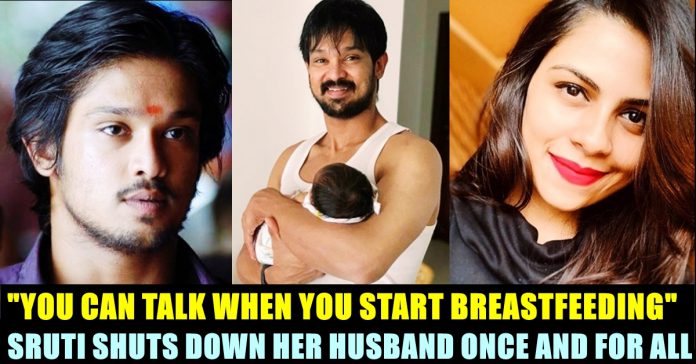 Actor Nakkhul and his wife Sruti blessed with a baby girl on 2nd of August and the actor shared it happily in his social media handle. Sharing a glimpse of his daughter to the world, the actor wrote “And just like that , our lives became a lil more magical ! ✨Baby Khulbee – Daddy’s Girl and Mommy’s World” in his post.

And just like that , our lives became a lil more magical ! ✨ . . . Baby Khulbee – Daddy’s Girl and Mommy’s World 💕 . . . @sanctumbirthcenter Vijaya ma’am , we owe it all to you ! @srubee , our lil one and I love you so so much 😘 . . . #nakkhulsrubee #khulbeetails #khulbee #babykhulbee #daddysgirl #mommysworld #itsagirl

Nakkhul married to his long time girlfriend Sruthi Baskar on 28th February of 2016. The adorable couple has been sharing the cutest moments of them together in their respective social media accounts. Going by her Instagram profile, Sruthi seems to be a Television host and Chef.

The lovely couple also can be seen involved in a little bit of banter in Instagram. Recently, Sruti captured a picture of Nakkhul and his daughter having a deep sleep. Sharing the picture, Nakkul said that he wonders how Sruti got the energy to capture the picture but couldn’t burp Khulbee or take long marathon walk.

I’m wondering how Mumma @srubee has all the energy to take this photo but no energy to burp her or take long marathon walks .. hmmm 🧐 #granny @jamunabhaskar .. please note the point 🤨 . @srubee tagging area just changed for you . . #khulbaebee #khulbeetails #khulbee #nakkhulsrubee #daddydaughter #daddydaughtertime #daddysgirl

Replying to that post, Sruti came up with an appropriate reply saying that Nakkhul can have a say in Motherhood only when he starts breastfeeding. She further demanded a “Thanks” from Nakhul for capturing the cutest moment. “The day you can start breastfeeding, is the day you can comment on how exhausted a new mommy can be. Stop complaining and be happy that I captured such a priceless Kodak moment ! 😝” read the reply comment of the Sruti. Read : Actor Nakhul’s Wife Shuts Down All The Trolls Which Criticized Her Height !!

Many of her followers who are Mothers started backing Sruthi which made Nakhul to close his mouth once and for all.

Here’s the reactions and Nakhul’s reply to them :

Nakkhul debuted in Tamil film industry through Shankar’s “Boys” but he made his debut as protagonist through “Kaadhalil Vizhunthen”. Nakkhul was 18 when he was chosen for the part of Juju in Shankar’s coming-of-age film Boys. His family had initially sent some pictures of his elder brother Mayur to Shankar’s office, but after seeing Nakkhul in one of the pictures, Shankar approached him to portray a leading role alongside an ensemble cast of newcomers. The actor who was last seen in “Sei” is all set to appear in “Eriyum Kannadi” post lockdown.

Comment your views on this reply from his wife !!

Radio jockey and playback singer Suchithra had a special bonding with her co-contestant Balaji Murugadoss inside the Bigg Boss house. Even after getting eliminated...

Two of the biggest stars of Indian cinema who command massive fan following have released their movies on January 10. Rajinikanth’s Petta is facing...