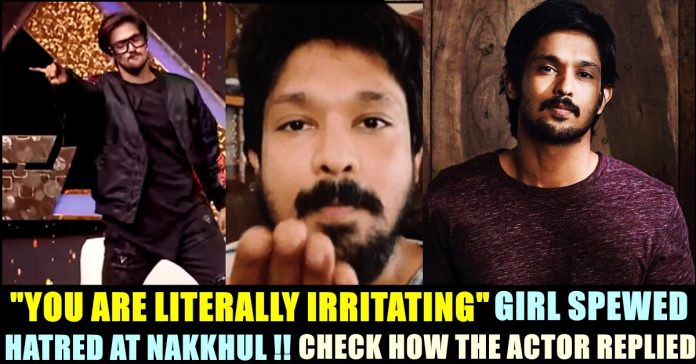 Actor Nakkhul Jaidev who is popularly known as Nakkhul among the audience of Tamil cinema, is currently participating in the “Bigg Boss Jodigal” show as one of the judges. The show which is bing telecasted in Vijay Television, includes the former contestants of Bigg Boss reality game show as dancing pairs, similar to the channel’s popular dance reality show Jodi Number One. Along with veteran actress Ramya Krishnan, Nakkhul has been taking part in the show as a judge.

On Sunday, when the actor uploaded a throwback picture with his wife in his Instagram space, an used named “Nikkithaa Pandian”, dropped a comment, personally attacking the actor for the way he carries himself in the show. It grabbed the attention of the actor himself as a result of which he happened to school the Instagram user to get help from a therapist.

A number of Bigg Boss celebrities have decided to take part in the new dance show “BIGG BOSS Jodigal” in which the male and female contestants could be seen pairing up with each other to clinch the title. Vanitha Vijayakumar- Suresh Chakravarthy, Gabriella Charlton-Ajeedh Khalique, Aranthangi Nisha-Dhaadi Balaji, Anitha Sampath-Shariq Haasan, Julie-Sendrayan, Samyuktha Karthik-Jithan Ramesh, Fathima Babu- Mohan Vaidhya are the pairs for the show judges of which are actors Nakkhul and Ramya Krishnan.

Initially, participants of the show became a subject to online troll and criticism for no appropriate reason. Contestants such as Julie, Anitha Sampath replied to the hateful commens they received based on the show. Now, an Instagram user attacked Nakkhul who could be seen spreading positivity at the show “Bigg Bos Jodigal” by being one of the judges. On Sunday, Nakkhul uploaded a selfie picture of himself with his wife and wrote “6 years Back this same day Shruthi & I were road tripping to #Ongole & #hyderabad for a dear friends engagement. Those were Braces days for the both of us 😬” as his caption.

Commenting on this post, the user whose Instagram handle name reads as “Nikkithaa Pandian”, spewed hatred at the actor based on the Bigg Boss Jodigal show. Through the now-deleted comment, she/he said that the “Boys” actor is “literally irritating the show”

Replying to her, Nakkhul asked whether she/he feels happy after making such hateful comment. He said that the comment doesn’t affect him and added that he feels bad for her/him. The actor said that the user needs the help of therapy and the comment is a sign of bad upbringing.

“Are you happy? Makes you feel better? Are you proud of what you’re becoming? A person who speaks
openly I ke this? It doesn’t affect me. I only feel really bad for you, you come all the way to a persons profile who you don’t even follow to spew hate like this.. That too for BB jodigal? It’s a dance show, not reality, watch another show if you don’t like .. but You need help and therapy.. signs of bad upbringing. Take care.” Nakkhul’s comment read.

However, the user who wrote the insensitive comment, seems to have deleted it now. Here’s the screen shot of the comment and the actor’s reply :

Nakkhul was last seen in a 2018 flick named “Sei” and is pretty much active in social media platforms nowadays. His upcoming film “Eriyum Kannadi” is expected to hit the screens post lockdown.

Karthick Subbaraj's Iraivi celebrated its 4th year anniversary on 3rd June. The third directorial of the filmmaker is based on a short novel of...

A leaked video that shows a 48 year old head master of a school romancing with a clerk, landed the former in huge trouble...