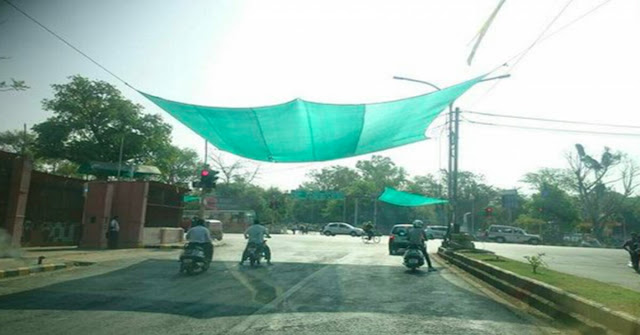 Unlike the fantasy world of Westeros, India has a different kind of seasonal dread settling upon them: Summers. With May almost approaching us, India has already seen a spike in temperatures. The sun is happily pan-frying us all throughout the country and no number of air conditioners
can help with that.
The situation is worse for commuters on the road, and more so for the ones on two-wheeler vehicles. In an effort to beat the heat, authorities in Nagpur came up with a solution that is pure genius: They have been installing tarpaulin covers over traffic signals in the city.
The temperature in Nagpur has been as high as 44 degrees in the month of April and this measure to bring some respite to commuters has been welcomed with a lot of enthusiasm.
According to a comment on the India forum on Reddit.com, this measure actually manages to kill “two birds with one stone”.