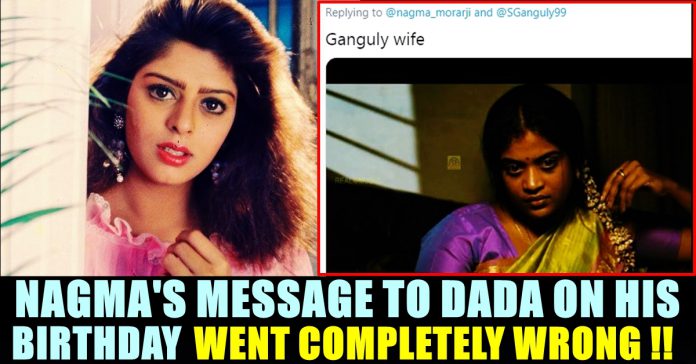 The relationship between Bollywood and Indian cricket has always been a controversial one. There is no denying the fact that the film industry and cricketing fraternity have always gone hand in hand. The crossovers with alleged affairs, has always been an attractive topic among the fans and the media outlets. From Ravi Shastri being linked with Amritha Singh to Jasprit Bumrah rumoured to have a relationship with Anupama Parameshwaran, the link-ups have always been a never ending one. Even our former captain MS Dhoni was rumoured to have a relationship with Deepika Padukone. The hottest Bolly-Cricket country in the country right now is Virat Kohli and Anushka Sharma as we all know. During early 2000s, a link up between former captain Sourav Ganguly and actress Nagma grabbed headlines often.

The current BCCI president and South film actress turned politician Nagma were in a rumoured relationship during the early 2000s and they were seen together in public places often. Reports suggests that there were even rumours that the two visited a temple and had performed a puja meant for married couples. While there were no say from Ganguly’s side regarding the rumours, the “Baassha” actress opened about her relationship with Ganguly in the year 2003.

“”Whatever one says, nobody has denied anything. As long as there is no denials of each other’s existence in each other’s life, any person can say anything they want” said Nagma in the interview. The report further stated that their relationship affected Dada’s performance on field , and Nagma was called out for creating a downward graph on his career. This resulted the break up, sources added.

“There was a career at stake, besides other things, so one had to part. One had to weight a lot of things, rather than be on an ego trip and insist on being together. A smaller interest had to be sacrificed for bigger interests” Nagma said in another interview.

Now, on Wednesday, the former actress wished ganguly on his 48th birthday. “Happy birthday” she wrote by tagging the official twitter account of Dada.

On seeing the post from the actress, many users from the micro blogging social media site, started reacting in a way of reminding the actress about the relationship of her with Ganguly. One of a user who asked others to tag Ganguly’s wife in the post in a sarcastic tone, got blocked by the actress immediately. Check out some of them below :

90s rumour I thought , but officially it is true now (dada+nagma)

However, The actress blocked most of the twitter users who made comments addressing the past.