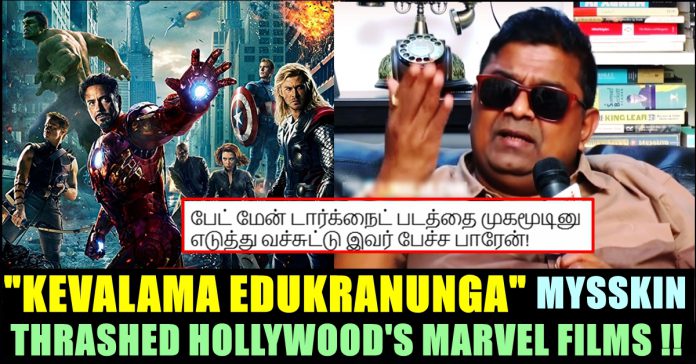 Tamil director Mysskin’s comment on Hollywood movies based on Marvel comics has created furore among the Tamil fans of the Marvel universe. The Marvel Universe is releasing fictional movies based on the comics of the same name. Super-teams such as the Avengers, the X-Men, the Fantastic Four, the Guardians of the Galaxy, and many Marvel superheroes live in this universe, including the characters with super power such as Spider-Man, Iron Man, Captain America, Thor, Wolverine, the Hulk, Black Panther, Doctor Strange, Scarlet Witch, Captain Marvel, Ant-Man, Deadpool and numerous others.

As Mysskin’s film “Psycho” is releasing in theatres today, the filmmaker has been participating in promotional interviews for various youtube channels. In the interview with Maalai Malar, Mysskin expressed his frustration while watching the movie Spider man in a theatre. He slammed the entire Hollywood films for making crap movies with no sense. When a question on whether his film is equal to hollywood or not, Mysskin who felt that Hollywood makes no quality movies said that he doesn’t care about the movies the make.

“Do they have four horns ?? Or do they wear two underwears ?? I don’t care about the movies they make. Their movies are worse nowadays. Their movies on marvel comics are intolerable. I feel our industry is far better comparing to hollywood. It is like wasting our money by throwing it in a sea.” said Mysskin who went on to share his experience while watching Spider man.

“I watched the movie Spider man in a theatre. I slept as soon as the film started” said the filmmaker. “Me and my friend went to watch Transformer in a theatre in USA. We started sleeping right from the 10th minute of the film’s start. The sound of our snore disturbed others as they complained it to the authorities.” he added. The director said that films like Asuran, Peranbu, Super Deluxe and Onaayum Aatukuttiyum are better than than hollywood movies as far as the story telling is concerned.

The filmmaker’s speech left the Tamil fans of Marvel universe irritated. The started pouring hatred towards the filmmaker and most of them mocked the super hero “Mugamoodi” which was made by Mysskin.

What do you think on these comments of Mysskin about Marvel ?? Comment your views !!

D. Imman’s First Wife Slammed Him For Finding A Replacement !!

Music composer D.Imman's first wife Monicka Richard, through one of her recent Instagram posts, slammed him for finding a replacement in a very short...