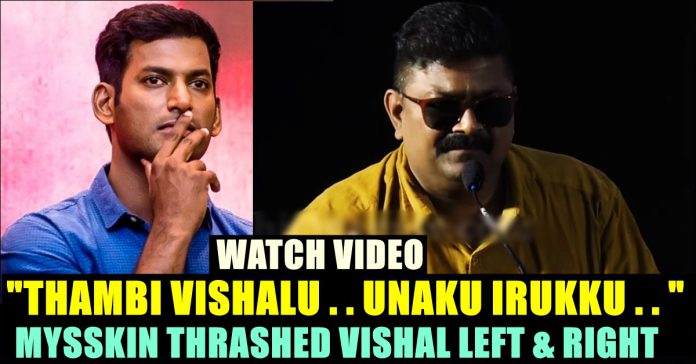 Director, Actor, Writer, Singer Mysskin came up with a reply to the accusation made by Vishal against him. Mysskin decided to share his side of the story in the promotional event of Zee5’s upcoming web series “Kannamoochi”. The filmmaker started his speech by assuring the makers of the webseries that his speech will become a big promotional material for them.

Mysskin said that he supported Vishal when the entire Tamil industry acted against him. “Before Thupparivalan 1, three of his movies became a flop back to back. During the climax of the film which was written by me for Vishal, there was a huge strike in the industry. For 6 long days, I shot the film by having just three assistant directors. Due to lack of budget, I shot a fight scene which was supposed to shoot for 4 days, in just 6 hours. I received 3 crores as salary for the film” said Mysskin in speech.

Proudly Presenting the First Look of #Thupparivaalan2 #KaniyanPoonkundran & #Mano back in action again, this time, “Hunting in London”#Thupparivaalan2FL #VishalDirection1 pic.twitter.com/BFQ5GLpbki

Mysskin revealed that the sequel of Thupparivalan revolves around Kohinoor diamond and said that he planned it to be a pan Indian. He said that he had a different producer initially to fund the movie. “But after hearing the story, he insisted on producing it himself.” said Mysskin who went on to reveal the budget of the film.

“I said that the film will require a budget of 19 to 20 crores and adviced him not to touch the film as he was in a big financial trouble. I even suggested him on writing a script for 10 crores budget which would revolve around Chennai city. But he refused the offer and insisted on producing it himself” Mysskin said who asked proofs to Vishal for the accusations he made in his press release.

“He claimed that I spent 35 lakhs to write the script. I want media portals which tarnished my image yesterday to ask him for the proof. I can provide evidence for spending 7 lakh in the 7.5 lakh he gave me” he said in his speech.

Further the filmmaker went on to reveal that his current pay scale is the main reason behind their rift. “Three years back I directed Thupparivalan for Rs. 3 crore. Now he wants me to work for the same salary. When I refused and walked off, he abused my mother with foul language.” said an emotional Mysskin.

“When my brother questioned him for using such language, he was beaten by him.” he added. Mysskin said that he shot for the movie for 32 days and was forced by Vishal to provide no objection certificate to continue the production. ” During the end of his speech, Mysskin warned Vishal by saying that the worst is yet to come. “Brother Vishal, don’t show your gimmicks to me. This is just the beginning. You can’t sleep hereafter. If you think you are righteous, come lets war” he said.

It is notable that the first look of Thupparivaalan 2 released on Wednesday by Vishal and to our shock it contained no credits for Mysskin, even for the story. Comment your views on this speech of the filmmaker !!

Previous articleIT Department Revealed The Salary Of Vijay For “BIGIL” & “MASTER” !!
Next article“I am Going To Become CM In 2021” Says Vadivelu !! WATCH

Former Indian cricketer Mahendra Singh Dhoni who has a huge fan base in Chennai, Tamil nadu, is going to start a film production company,...