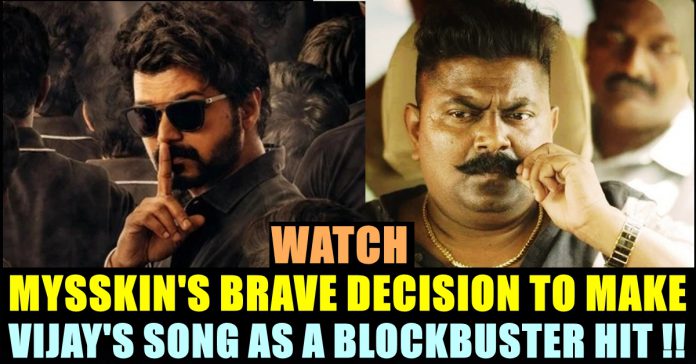 Before becoming a filmmaker, Mysskin says that he worked in 72 fields such as cooking, selling etc. He also worked as an assistant director to director Vincent Selva who is known for directing films like Vijay’s Youth, Mystery thriller Jithan etc. In a recent promotional interview, Mysskin revealed how he worked hard while working as an assistant director. The filmmaker said that he loved his job and it drove him to work hard like an insane person.

Mysskin worked as an assistant director in Vincent Selva’s “Youth”. The film which has actor Vijay in the lead role has a song “All Thotta Boopathi” which became a blockbuster in its release time. In this promotional interview with Behindwoods, Mysskin revealed how he made that song to take place in the film.

“I didn’t like the song they wrote initially in the film “Youth”. I said to my director that I don’t like that song. He asked me to shut up as it was my first film as an assistant director. I even tried to convince the producer to compose the song with different lyrics. I brought my friend to write the song but they didn’t convince” Mysskin started narrating the incident that happened around 2002.

“As I sing well, they asked me to teach the song in the recording room. Music director Mani Sharma don’t know Tamil and Shankar Mahadevan is the one who is going to sing. As Producer and Director left the place, I replaced the old song which was written by Lyricist Vaali with a new song written by my friend Kabilan. That song is All Thotta Boopathi” said the filmmaker.

Watch the video below from 11th minute :

Apart from this, Mysskin shared many incidents that took place in his directorial career which spans more than 10 long years. The interview is about his upcoming film “Psycho” in which Udhayanidhi Stalin has played the role of a blind protagonist.

Mysskin’s films such as Anjathe, Nandalala and Onaayum Aattukkuttiyum have received critical acclaim. He made his acting debut with Nandalala, where he played a mentally-challenged man. His recent films Pisasi and Thupparivalan were acclaimed critically and commercially and the director is now became one of the leading filmmakers who loves to make content oriented films.

What do you think on this activity of Mysskin as an assistant director ?? Comment your views below !!

Television actor Dinesh who got separated from Rachitha Mahalakshmi after marrying her years ago, reacted to the way Robert Master is behaving towards her...