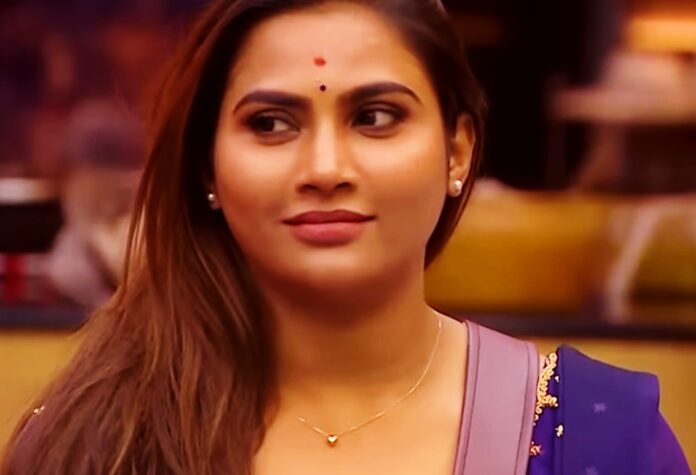 Bigg Boss contestant Myna Getting trolled for the way she responded to the question of a viewer of the show in a lethargic way. On the weekend episode of the ongoing Bigg Boss season, Kamal Haasan let few of the viewers of the show to question the contestants. A female follower, in a sarcastic way, asked Rachitha and Myna whether they are enjoying their paid holidays, in a way of denoting that they are not taking much participation in the show.

Answering to her, Rachitha said that it is not her intention and promised the viewer to perform better in the coming days. In the meantime, Myna said “I’m trying my best. If you can, call and vote for me, if not, eliminate me, Thank you”

Myna’s answer gained her more hatred from the audience. “Every contestant answered the audience with fear and respect, and then here comes the arrogant and cringe contestant #Myna who is showing her attitude to them. Cheap and worst” a follower of the show said after watching the episode whereas another one said “Omg is she thinks this is her as usual KPY show #Myna why so much attitude & disrespect towards KH & Audience very irritating to watch”

Omg is she thinks this is her as usual KPY show #Myna why so much attitude & disrespect towards KH & Audience very irritating to watch 😡🤬🤬#BiggBossTamil #BiggBossTamil6 #CringeMyna pic.twitter.com/auYbHkBLg0

What was that #Myna.. your response was like pudicha paaru illana eliminate pantu po ra maadri irundhuchu..#Rachitha answered decent way.. I am playing but if u feel it’s less I will play more..#BiggBossTamil6

Every contestant answered the audience with fear and respect, and then here comes the arrogant and cringe contestant #Myna who is showing her attitude to them. Cheap and worst 👎🏼😠😡.#BiggBossTamil6 #biggbosstamil pic.twitter.com/ddtcKS7YLg

Semma attitude reply from #Myna not fair she being senior among others didn’t expect from her 👎 #BiggBossTamil6 pic.twitter.com/fMghUYGNza

Worst Attitude u gonna pay for this without audience support u can’t sustain in Entertainment industry pic.twitter.com/NcEXicI30b

#Myna was so too much in today’s episode. Her overlapping whenever the host while giving feedback, making mocking comments and her response to audience questions was really irritating.#Biggbosstamil6

#Myna attitude is wrong from the beginning of the show 👎#BiggBossTamil6

I really dont know what was she trying to pull off? Funny? Cheeky? Gethu?

She insulted the host and the audience – Needs to be polandified imo. #MynaBBkuVena #BiggBossTamil6 https://t.co/A8Sn4lgwRR

#Myna ku #Myna podum. She will self expose herself by opening her mouth. Others don’t have to expose her. #BiggBossTamil6

Previous article“Why Are You Cornering Me? ” – Actress’s Question To Director On Stage Created Controversy
Next articleSamantha Removed Her Pictures With Chay After This One Of Him Got Leaked ??

Actress Samyukta Hegde, a Bangalore based actress who is known among Tamil cinema audience for appearing in a recent blockbuster "Comali" attacked by public...