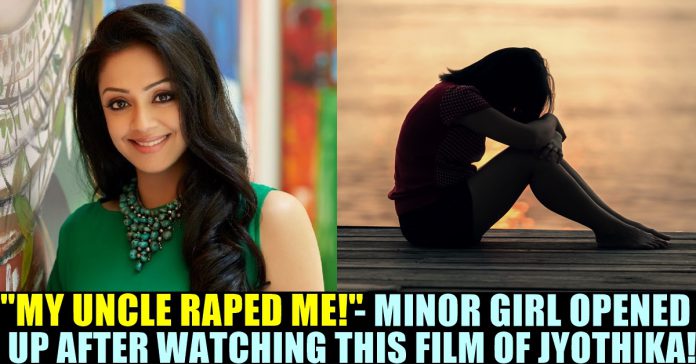 Movies create a great impact on people in different ways. People swayed by the movies also handle situations in the real-life inspired by those movies. Each dialogue uttered in the movie has proved to influence the people. A recent incident in Royarpuram, Tamil Nadu has made us understand how cinema plays an important role in the life of many people.

A nine-year-old abused by her relative has opened up seeing a movie. The victim has watched the Jyothika starrer movie Ponmagal Vandhal. In the movie, a particular scene has made the woman open up to her mother about the harassment and exposed the harasser who turns out to be their relative. After she informed her family has complained the 48-year-old relative of theirs, to the police. The case was taken to Madras High Court and the court announced 5 years of imprisonment to the accused.

Ponmagal Vanthal was released on 29, May 2020. The movie directed by J J Fredrick was bankrolled by Actor Surya’s own production house 2D Entertainment. Actors Jyothika, K Bhagyaraj, R Parthiban, Prathap Pothen & PandiaRajan have acted in pivotal roles. The movie provided a clear picture of the life of a girl who is harassed at a young age. The legal proceeding, the impact such harassment can create on the victim, & male dominance are some of the crucial concepts in the movie. This is the first Tamil to be directly released on an OTT platform.

In a particular scene, a piece of advice is given to the children to tell share everything with their mother. This scene has made the girl expose her relative who has been abusing her.

Actress Jyothika has shared this on her Instagram and has captioned, “Shatter that silence!
Each time a woman stands up for herself, unknowingly she stands up for all women.”

Actor Riythvika, who was thus far considered an underdog at Bigg Boss Tamil Season 2, emerged the winner of the most viewed reality show, winning...

During a promotional event for his upcoming film "RRR", Director SS Rajamouli opened about the interaction he had with Tamil Super star Ajith kumar...