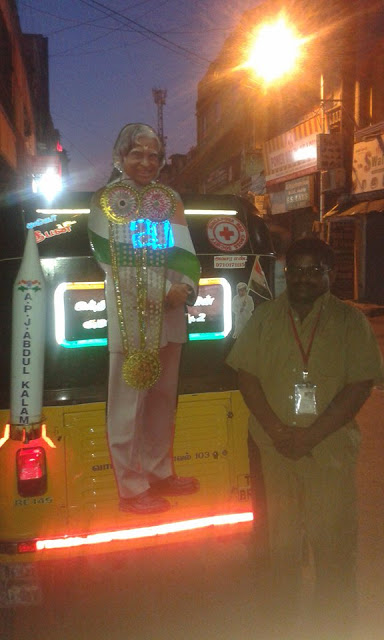 My Story : An Auto Driver with an “Ignited Mind”

An Auto Driver with an “Ignited Mind”

Many of us have drawn inspiration from the legend and the late former President of India Dr. APJ Abdul Kalam. His words have laid a foundation of strong and positive beliefs among many people, youngsters and the old alike.
Among such inspired and ignited minds , is Mr. Dhanraj from Kotturpuram. A classic example to show that, you need not be in a position of power to bring about a difference in this world.
Dhanraj is an autorickshaw driver. He has transformed his trusted auto into a mobile Abdul Kalam museum.
He is a social reformer and has helped many victims of accident.

On Kalam’s birthday, Dhanraj offered free rides to all his customers. In this age of money fleecing autorickshaw drivers, there are people like Dhanraj who go above and beyond their call of duty.

The Indian team lost the second ODI against England at Lord’s stadium by a big margin of 86 runs and now the series is...