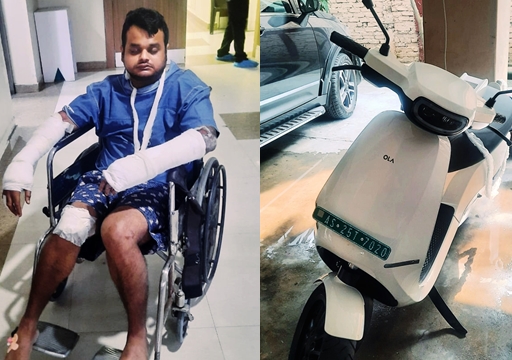 After a customer from Guwahati who owns an Ola S1 Pro electric vehicle alleged that his son met with an accident and suffered severe injuries due to the faulty regeneration system of the Ola EV, the company came up with a clarification, saying that the rider was over speeding before the accident took place. 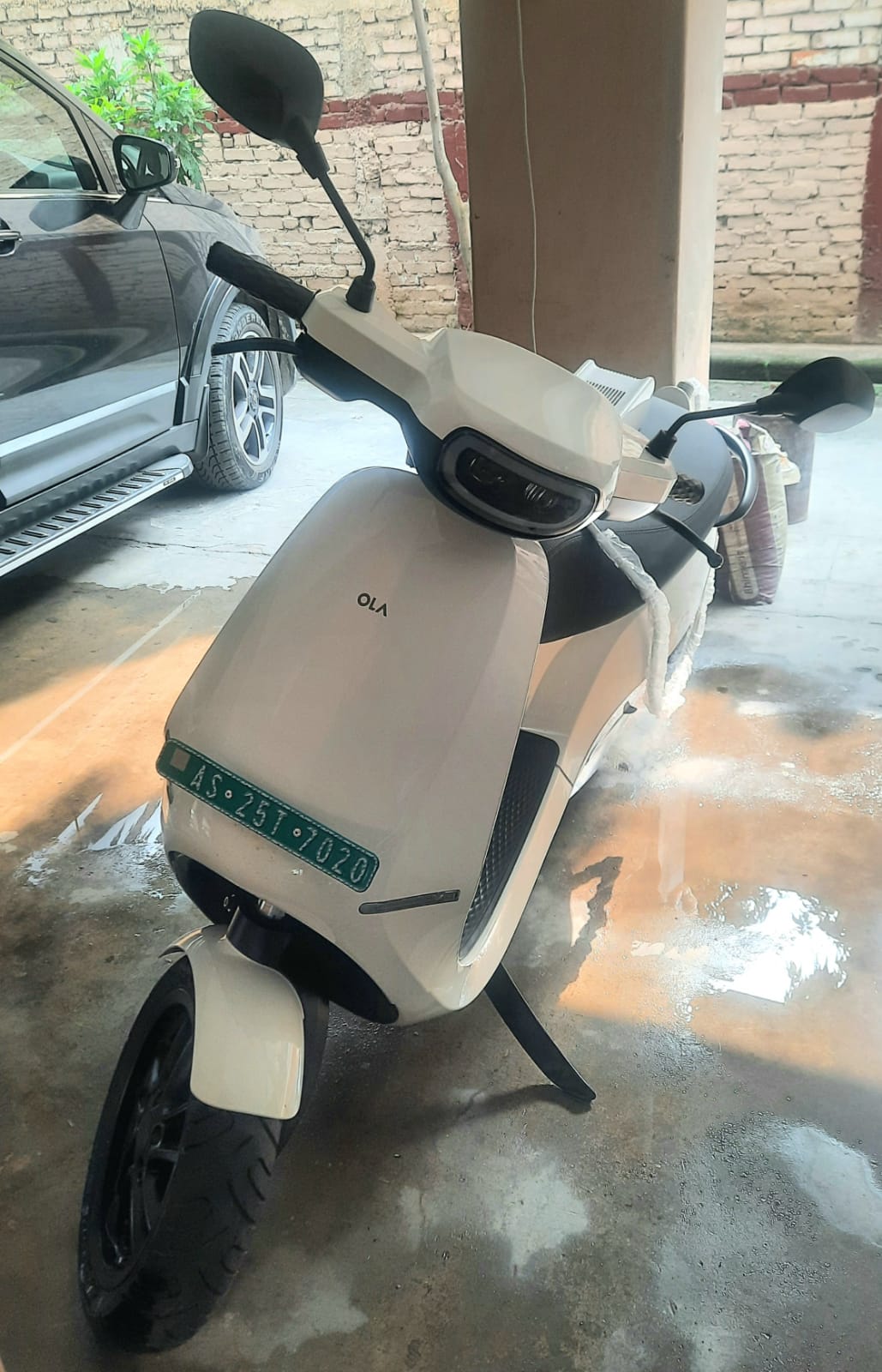 A Twitter user named Balwant Singh, on 15th of April, came up with a tweet producing videos and pictures of the Ola EV vehicle he bought on 26th of March and the injuries his son suffered while riding the vehicle. In his allegation, Balwant claimed that the vehicle was speeding instead of slowing while his son was trying to put break after seeing a speed breaker. 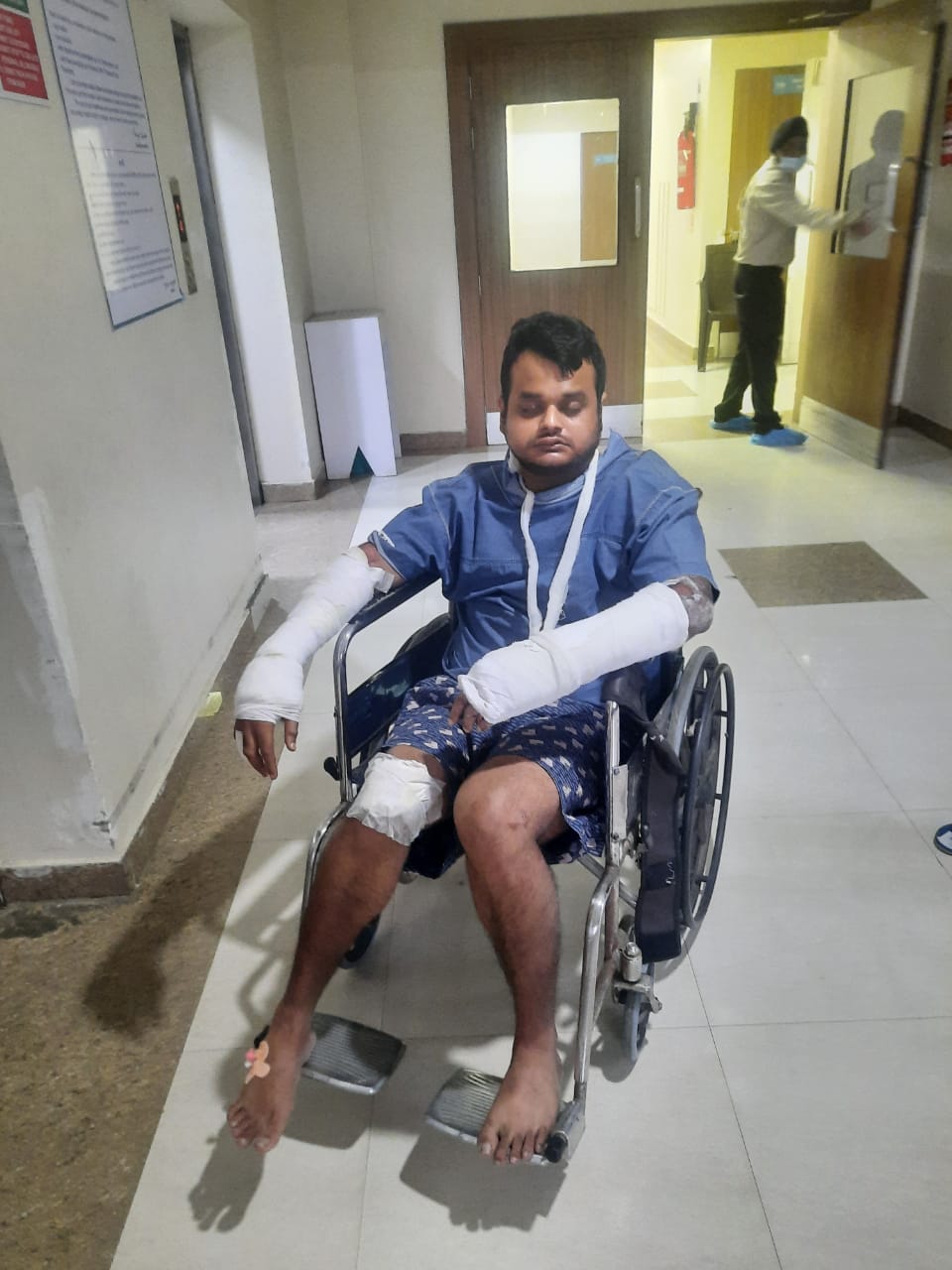 “I had purchased new Ola S1 Pro. On 26th March 2022 my son had an accident due to fault in regenerative breaking where on speed breaker instead of slowing, the scooter accelerated sending so much torque that he had an accident” Balwant said through his tweet by adding a video of his vehicle.

The scooter went airborne crashing and skidding. My son was severely hospitalised on 26th March where he had fractures in left hand and 16 stitches in right hand due to fault in ola S1 Pro @bhash @OlaElectric pic.twitter.com/nwjTDv7SBA

“The scooter went airborne crashing and skidding. My son was severely hospitalised on 26th March where he had fractures in left hand and 16 stitches in right hand due to fault in ola S1 ProPro” Balwant further stated and went on to write “He had to be flown from Guwahati to Mumbai to undertake Surgery under Dr. Sudhir Warrier to save his left hand from life long disability. He had 5 wires and a plate inserted in left hand with 2 fingers under doubt”

He also complained about the company being unresponsive after taking custody of the vehicle. The tweets of Balwant went viral among the users of online platforms with many reacting in various ways.

@OlaElectric on 11th April towed away the scooter and an Executive Chandan Kumar called to understand the issue, but thereafter till date no phone call from Ola when I had requested a call from your legal team. Please contact asap @bhash (4/n) pic.twitter.com/DikvX83m3f

Reacting to the allegation, Ola, on Friday, came up with a clarification with graphs explaining what all the driver did before the accident took place. The company concluded that Balwanth’s son was over speeding and applied three breaks at the same time which caused the vehicle to come to 0 kmph from 80 kmph in 3 seconds.

The vehicle was detected by their sensors, said that company and said that no malfunction as per the claim of Balwanth took place in the regeneration system of the vehicle.

@bhash @OlaElectric I am still awaiting Investigation Report of you Ola Team alongwith datasets for the date of accident which ur Executive told was recorded in the scooter but was hesitant to share. Can’t we customer’s have access to our own ride data? Please share via email!

“We did a thorough investigation of the accident and the data clearly shows that the rider was overspeeding throughout the night, and that he braked in panic, thereby losing control of the vehicle. There is nothing wrong with the vehicle. Our operating system tracks various vehicle sensor data which we receive real time in our cloud. Below graph shows speed data for this incident for a 30 min duration till the accident time” said the statement of Ola.

After showing that the rider traveled 7 kms and 4 kms in 115 kmph speed, Ola said “our data shows all three brakes being applied together – front brake, rear brake and regenerative brake (reverse throttle) likely due to an obstruction on the road. This brought the speed down from 80kmph to O kmph in 3 sec. In the data, no sudden torque or acceleration is observed after braking, contrary to the customer claims. The
vehicle is detected by our sensors to have fallen on the right side” 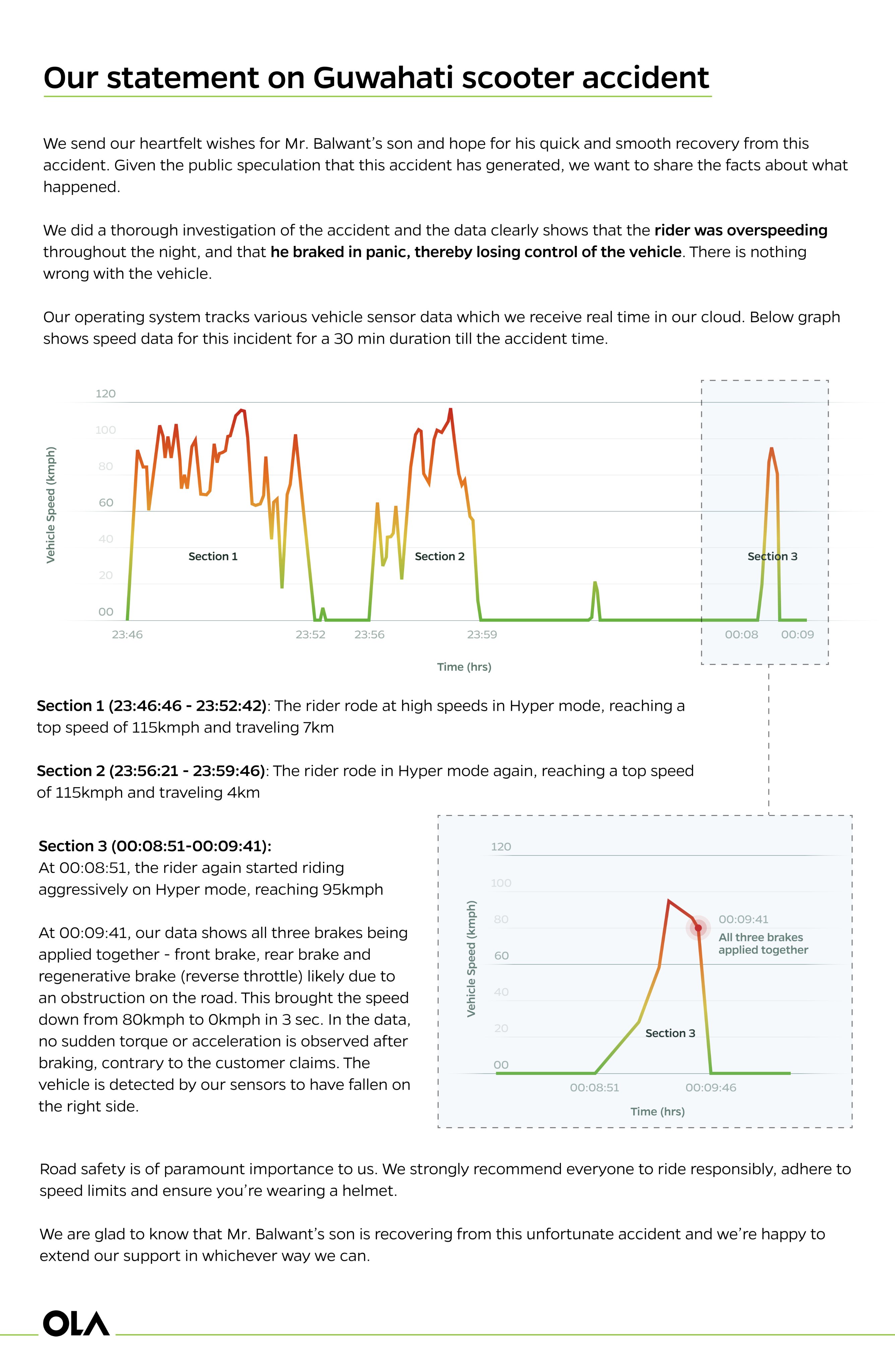 “Road safety is of paramount importance to us. We strongly recommend everyone to ride responsibly, adhere to speed limits and ensure you’re wearing a helmet.
We are glad to know that Mr. Balwant’s son is recovering from this unfortunate accident and we’re happy to extend our support in whichever way we can.” The company further stated.

Here’s the public note released by Ola as a response to Balwanth’s claim :

Our statement on the Guwahati scooter accident pic.twitter.com/LbwDLXNh3P

On May 5, Shivani Narayanan of Bigg Boss season four turned 20 and celebrated her birthday event with her closed ones. It is reported...

Unknown Facts Of MLA J Anbazhagan Who Died Of COVID 19 !!

J Anbazhagan who was fighting against the COVID 19 for past few days, died at the age of 62 in a Chennai hospital in...

A viral video that shows a college student and a female professor abusing each other verbally and physically is trending in the social media...