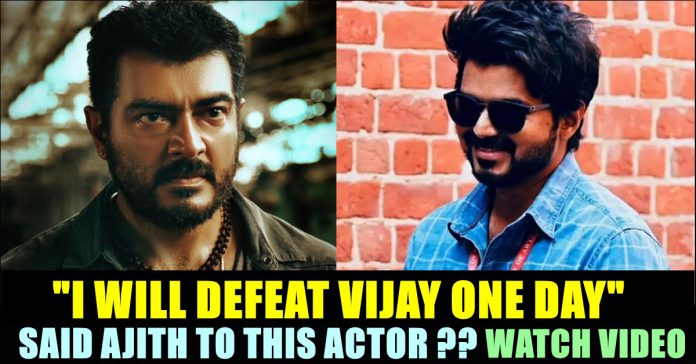 Actor Vijay’s best friend Sanjeev, in his recent interaction with a youtube channel, has opened on his meeting with actor Ajith kumar and revealed what he said to him regarding his rivalry with the “Mersal” actor. Sanjeev says that Ajith treated him very well despite of knowing about his friendship with Vijay and said that he wanted to win Vijay and go past him. Sanjeev who studied with Vijay in Loyola college, acted with him in some of his earlier films such as “Nilave vaa”, “Badri” etc. After that, Sanjeev went on to excel in TV serials and gained widespread fame after acting as “Selvam” in “Thirumathi Selvam” serial. He also hosted shows and audio launches.

Ajith kumar who is considered as a rival of actor Vijay since mid 2000s, has a strong friendship with the “Gilli” actor since early 90s. They both acted together in a movie named as “Rajavin Parvayile” and their friendship became evident in certain occasions. Recently, in “Master” audio launch, Vijay said that he got inspired from his friend Ajith and wore suit for the first time for an event purpose.

Ajith who is known for his screen presence, impressed his fans with his off screen personality. Meanwhile Actor Vijay is known for his exceptional dancing skill and for his special ability of attracting kids effortlessly. Now, Sanjeev, had said that Ajith wanted to win Vijay in the ongoing race between them.

Sanjeev said that Ajith is an determined individual who believes in fate. He further went on to share about an incident that took place in the shooting spot of the actor. “Me and Srinath went to meet Ajith in his shooting spot. He received us well and provided a warm hospitality. He very well knows about our relationship with Vijay. This incident took place 10, 12 years back.” Sanjeev says.

“That was a time when both of them had a tough competition. Knowing that we are the friends of Vijay, he said that winning Vijay is his aim in life. ‘I will defeat your friend and would go beyond. You wait and see’ he said. When we said it to Vijay, he also laughed. Vijay admired this generous nature of AJith” Sanjeev said.

Previous articleDhoni Won The “ICC Spirit Of Cricket Award Of The Decade” For This Gesture !! WATCH
Next articleWarner’s Heart Winning Replies After Impersonating Kohli !!

Actor Sanjeev who is a long time friend of Thalapathy Vijay appeared for an interaction to talk about his friendship with the "Bigil" actor....