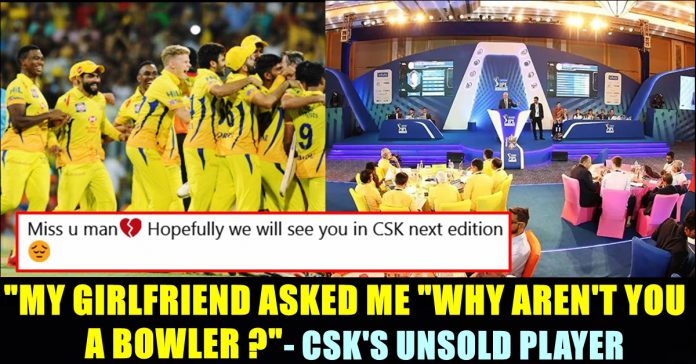 “My Girl Friend Sarah Asked Me This” – CSK Player After Going Unsold !!

The most awaited IPL auction is currently progressing with unexpected twists and turns. About 1114 players had registered themselves for the auction. Only 292 players have been shortlisted by the BCCI after the franchises sent their preferred lists to the board. So far Chris Morris and Glenn Maxwell has been sold for highest prices. Rajasthan Royals paid Rs. 16.25 for Chris Morris whereas Maxwell was bought for Rs. 14. 25 crore by Royal Challengers Bangalore.

THE MOST EXPENSIVE PLAYER IN #IPL HISTORY IS NOW A ROYAL!!!

Billings made his IPL debut in 2016 for the Delhi Daredevils and, after two seasons, moved on to the Chennai Super Kings. At CSK, Billings played a few match-winning knocks but ended up with an average of just 13.50 in the 10 matches he played. Though, having a sensational form for England’s ODI team last summer, Sam was released by CSK last year.

So far, he has played 22 games in the IPL and has scored just 334 runs at a modest average of 17.57. With this numbers, the base price of Rs. 2 crore for the cricketer looked a bit too much it seems and no team showed interest to buy him for their side.

After going unsold in the most important T20 league of the world which is going to take place just before the ICC T20 world cup, Sam Billings came up with a tweet in his official twitter account which garnered huge attention from the social media users.

The cricketer said that his girl friend asked him why he didn’t choose bowling as his career as a reflection to the IPL auction. “My girlfriend Sarah just turns to me and goes… ‘why aren’t you a bowler?’” his tweet which received 30k plus likes so far read.

My girlfriend Sarah just turns to me and goes… ‘why aren’t you a bowler?’ 🤣

Meanwhile, former KKR captain and Indian wicket keeper batsman Dinesh Karthik came up with a tweet writing “My mom had suggested me to become a fast bowler , but I ended up listening to my dad. My mom always had the vision in the house, it’s pretty obvious now , isn’t it” and added “Fast bowlers dealing in millions” as his hashtag.

My mom had suggested me to become a fast bowler , but I ended up listening to my dad 🤦🏻‍♂️🤷🏼‍♂️ . My mom always had the vision in the house, it’s pretty obvious now , isn’t it 😋😅#IPLAuction2021 #fastbowlersdealinginmillions

Check out some of the reactions for these tweets below :

Feel for you mate. You deserved a team. Hopefully, someone will buy you afterwards🤞🤞

You belong to our CSK Family. I hope you will play for csk again in Mega Auction. Don't worry 😔.. lot's of love to you Brother 💛

Previous articleCSK Liked This Meme & Confirmed Why They Went For Maxwell !!
Next article“This Is Why Vijay Rejected Kaaka Kaaka” – GVM Opened For The First Time !! WATCH