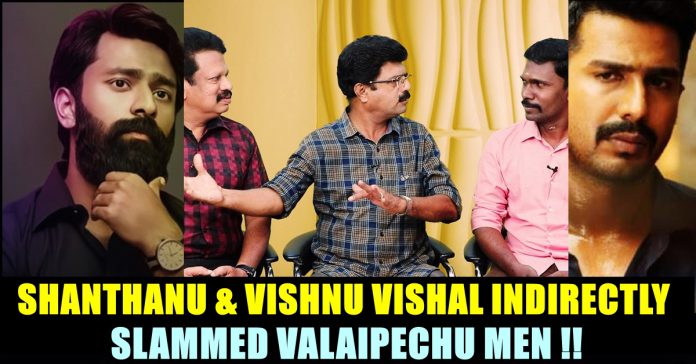 Actor Shanthanu, his wife Kiki Vijay, Director Rathnakumar and Actor Vishnu Vishal reacted to a remark made by movie journalists of Valaipechu youtube channel. They who took a sly dig at Shantanu’s professional career, indirectly mocked Shantanu’s father Bhagyaraj for choosing scripts for his son. The “Chakkarakatti” actor slammed them through his official twitter account with a number of tweets.

In one of their recent episode, members of “Valaipechu” youtube channel who is known for providing exclusive movie updates, talked about the Tamil anthology film which is going to stream in Netflix online platform. The four stories which are going to feature in the anthology film were directed by renowned filmmakers of Tamil film industry, Vettri Maaran, Sudha Kongara, Vignesh Shivan and Gautham Vasudev Menon. Followed by the success of Lust Stories in Bollywood, Netflix came up with this initiation in South which is going to portray the “Honour killing” in Tamil nadu. Shanthanu Bhagyaraj, Kalidas Jayaram, Anjali, Sai Pallavi, Prakash raj are some of the known faces we are going to witness in this first of its kind web film in Tamil.

While updating about the news, Bismi, one of the movie journalists of Valaipechu said that the film is receiving good reviews from those who watched it. He said that Kalidas Jayaram and Shantanu Bhagyaraj are going to have a handful of projects after the release of this anthology film due to their outstanding performance. “Kalidas and Shantanu are going to be busy again after the release of this film” said Bismi to which Anthanan, another journalist said “Not again, they are going to be busy for the first time in their career”.

“Shanthanu is going become a Superstar of short films it seems. Earlier, he featured in a Gautham Menon’s short which was good and he himself made a short film as well. Why he is not excelling much in big screens ?” asked Anthanan to which Sakthi replied “Perhaps, he is selecting the scripts for short films by himself”, indirectly mocking Bhagyaraj, a legendary filmmaker and father of Shanthanu.

It is widely believed that Veteran filmmaker Bhagyaraj is selecting scripts for his son Shanthanu and a rumour surfaced saying that Shanthanu missed to act in several films including 2008 blockbuster film “Subramaniyapuram” due to his father’s intervention. However, Shantanu brushed it off in one of his interviews. Read : Shanthanu Finally Opened On Why He Missed To Do “Subramaniyapuram” !! WATCH

Now, reacting to this mockery, Shantanu, in his tweet said that his father would always look out for the best for him. “You are nowhere close to him & don’t have the rights to talk about him…. You earn a living talking about others. So keep your “nakkal paechu” with urself …” the actor wrote in his tweet.

He’s my dad
He’s a legend
He always looks out for the best for me….
You are no where close to him & don’t have the rights to talk about him…. You earn a living talking about others
So keep your “nakkal paechu” with urself …

Shantanu’s wife Kiki Vijay replied to this tweet of her husband by asking him to avoid talking about them.

They earn by talking about others, The more we speak about haters, we r givin them more mileage👎 https://t.co/A8gk3mkzTr

Supporting his colleague, actor and producer Vishnu Vishal replied to Shantanu by asking him to concentrate on positive things. “Lot of people have made their careers by talking ill and negative about others..Negativity sells .. So we as a society need to bring about a positive change in us..” the actor wrote in his reply tweet.

See now that is the problem…
Lot of people have made their careers by talking ill and negative about others..
Negativity sells ..
So we as a society need to bring about a positive change in us.. https://t.co/f0ORNPwxRf

Shanthanu worried about the fact that part of our society encouraging their remarks. The actor who got very much disappointed for dragging his father, asked “are they even close to anything that my dad is today?” through his tweet.

Part of our society encourages dis bro!
1st of all,u don’t have d rights to talk ill about any1,Adhu kuda parava Illa we are in an industry where all such nonsense exists so freeya vidu!
Sammandhame illama talk about my dad??
are they even close to anything that my dad is today https://t.co/BhU20M4UZp

Absolutely true bro
Remember when they dont hav much to talk against you they attack your family:)
And i understand abt 'DAD' emotion..
I have been through it multiple times myself.
Good you spoke out for ur DAD💪 https://t.co/sLQxAvgEVj

Director Rathnakumar stretched his supportive hand to Shanthanu as well.

On the work front, Shanthanu is going to appear in Vijay’ “Master” and a movie named as “Raavana Kottam” is also expected to release post lockdown.

Previous articleRiythvika’s Clarification Regarding Her Reply In Instagram !!
Next articleVanitha Vijayakumar Questioned Kasthuri & Lakshmy For Not Voicing Out For Ramlath !!

First ever glimpse of "Nayanthara: Beyond the Fairytale", a show that is being made by Netflix based on her real life is out and...

SJ Suriya's reaction to the ongoing controversy regarding his recently released "Nenjam Marappathillai" caused hilarious reactions from the users of Twitter. The actor, reacting...

Amidst the surging cases of COVID 19 virus in state Tamil nadu, people at the outskirts of Coimbatore district came up with a temple...