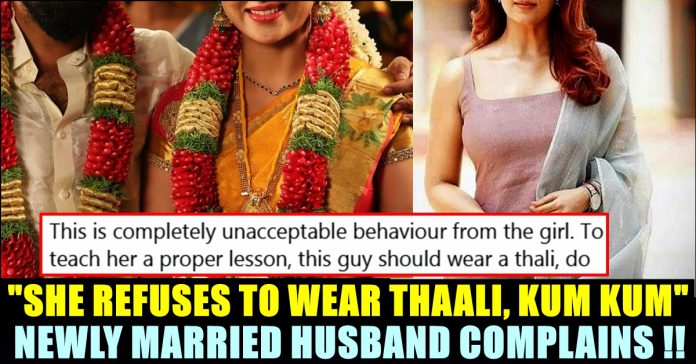 An alleged write up of a newly married husband complaining about his wife for not following the culture of Tamil society irked the users of online as the post which was published on a Facebook page named “TCS Siruseri Confessions and Memes” went viral across the other social media platforms such as Twitter, Instagram etc. The 29 year old husband says that he is feared about the future of his yet to be born daughter due to the behaviour of his wife.

The husband who says that he is an employee of a software company, expressed his dejection over his wife who also works in a software company for frequently removing her “Thaali” after one month of their marriage ceremony. He also complains against her for not wearing “kumkum” on her forehead.

Despite of his several Gyans, the woman seemingly refused to listen to her husband which made him to vent out his emotions through a Facebook confession page. “I advised her many times that our tradition doesn’t allow this but she is not caring” his post reads.

He further asks suggestions to the followers of the confession page whether he should make her live with his parents who are residing in his native. The husband believes that the advises of his father and mother could help her follow the Tamil traditions. “I always wanted a working woman to marry but not a woman who would not respect our culture” he wrote in his post.

The husband also feels bad about his wife for not following the “Vegetarian diets” on Tuesday and Friday and wants her to visit temple on every Friday which she refuses to do. He says that he is forced to back up the lies told by his wife to his mother on any kind of “Viratham” and “Pooja”. “My family is very orthodox and traditional.. but she is very lazy… She also refuses to wear saree when we visit our relatives in village.” says the husband through his post.

The man also doubt whether his wife is a right match for him or not and fears about the future of his yet to be born daughter. “What if she raises our daughter also like her if we have one in future??? Also we didn’t ask for any dowry also from her family.” he concluded his post.

This post garnered huge reception from the users of online. Majority of them who read it felt that the woman needs to be freed from him. A social media user wrote “This is completely unacceptable behaviour from the girl. To teach her a proper lesson, this guy should wear a thali, do poojas, viradhas, go to temples, that would show her.” to troll the guy whereas another one said “I think this is an awesome woman!”

it's so disgusting and i can think of a lot of my irls who'd do the same thing 😀😀 ellathayum panitu last la he's like "I didn't even get dowry from her" ???? That's not something he has to be proud of? men are so cheap and for what, meh

Just accept it guys the way marriage works in India more and more girls are gonna stay single …
If not for the caste basee arranged marriage concept we will be with other patriarchal Asian countries like China , Jpn wrt fall in number of marriages.

They clearly never spoke anything about their lifestyles before marriage.

Look at the audacity with which he is comparing Mom n Wife, the kind of men we actually avoid to marry😅

pls imagine being her 😩😩

This is completely unacceptable behaviour from the girl. To teach her a proper lesson, this guy should wear a thali, do poojas, viradhas, go to temples, that would show her.

Previous articleGirl Begs For Justice After The Murder Of Her Father !!
Next articleRaiza’s Fitting Reply To An Inappropriate Comment Of A Follower !!

Stand up comedian Abhishek Kumar who is known for his Instagram reel videos, deleted his recent one after receiving flak from his own followers....

Actor Redin Kingsley who is known for his performances in films such as "Kolamaavu Kokila", "Doctor", in a recent interview, said that Nelson Dilipkumar...