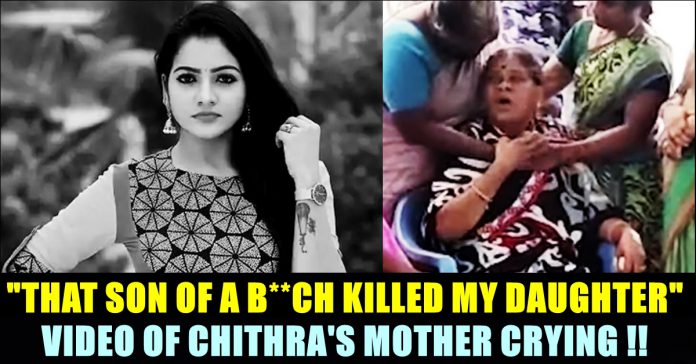 Video of Chithra’s mother swearing that her daughter never committed suicide has surfaced. She firmly believes that someone had killed Chithra after beating her. “My daughter is not a coward. The whole world knows it. She is the not a kind of person who commits suicide” the mother can be heard crying.

Now, a video of Chithra’s mother crying has been surfaced. She could be seen saying that someone had killed her daughter. “My daughter never committed suicide. She never did. He killed her by beating her. That son of a b**ch killed my daughter” she could be heard crying. “I can’t bear the pain, My chithra” she cries.

However, Chithra’s father had told the media that he didn’t suspect anyone. “I don’t suspect anyone. She stayed at the hotel as it got too late.” he said who added that Chithra didn’t call him on Tuesday. “Her marriage was arranged by us. Register marriage took place earlier. The traditional marriage was planned to take place on 10th of February.” he said. “Hanging is the reason for the bruises on her face. I have asked the police to find the actual reason behind my daughter’s death through my complaint and to take proper action” he added.

Chithra was seen very much enthusiastic hours before her demise according to her colleagues which left the public to speculate mysterious possibilities. The “Pandiyan Stores” actress was in EVP film city on the wee hours of Wednesday to complete her part in the shooting for Star music.

After finding her body in the star hotel she was staying with her fiance Hemnath, Chithra was admitted in a nearby government hospital where she was declared dead by the doctors. Later, her body was sent to Kilpauk government hospital for post mortem. The report of Thanthi suggests that Chithra and Hemnath were involved in an argument last night. In the preliminary investigation, it has been reported that the cause of Chithra’s death was suicide as the bathroom door was locked from inside. However, the results of post mortem is awaited.

Chithra also shared pictures and videos in her official Instagram account where she enjoyed 15 lakh plus followers, hours before her death. While many people who belong to Television industry offered their condolences to the family members of the deceased, a number of colleagues disclosed about the details of Chithra’s final moments as well.