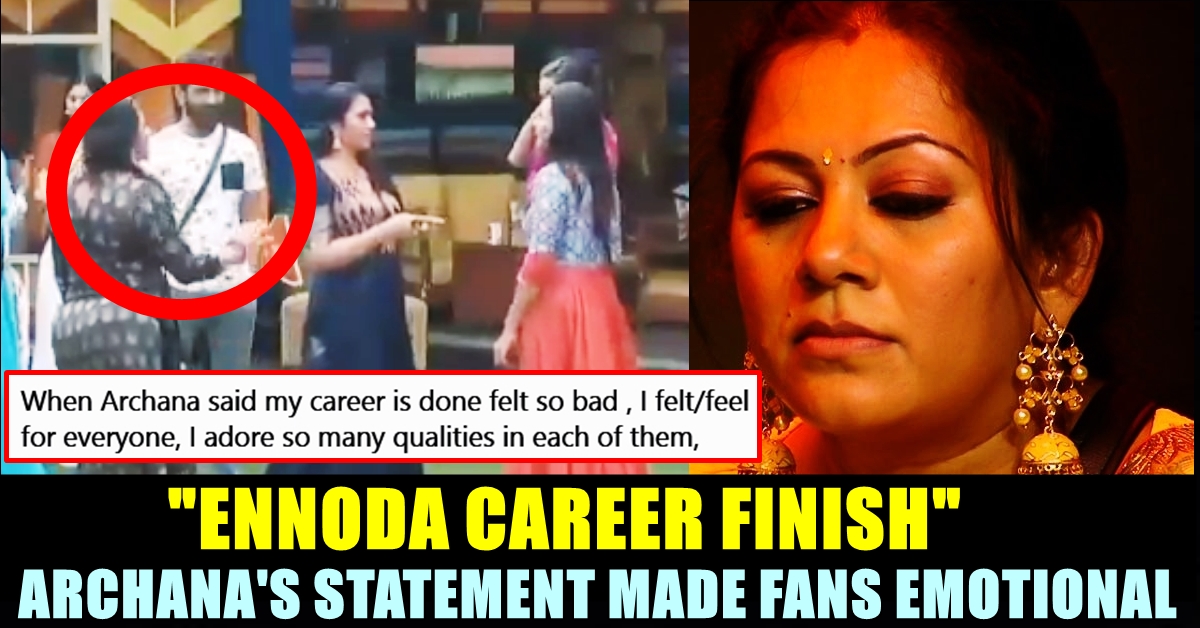 Evicted contestants of Bigg Boss season 4 united again for the celebration of Pongal festival and to meet their buddies inside the house. They could be seen spilling the beans to the finalists about how the outside world is reacting to the show. Model Samyuktha who got evicted weeks ago, went one step ahead and revealed the voting stats to Balaji Murugadoss. Now, a video of Archana saying that her career got spoiled due to her participation in the show to her co-contestants is doing rounds in social media platforms with various kind of reactions.

Amidst all the drama, Gabriella who is one of the finalists of the cash rich show, left the house with Rs. 5 lakh offered by Bigg Boss. Meanwhile, a video of Archana saying that her career got spoiled due to her participation in the Bigg Boss show is doing rounds in the social media platforms.

While the evicted contestants such as Rekha, Samyuktha, Archana were having a conversation, Archana could be heard saying “But career finish-nrathu enaku thaan” to Samyuktha who said that they had a different kind of experience after getting evicted from the show.

On seeing Archana restricting herself within a small circle of people inside the Bigg Boss house, fans of the show got disappointed and started criticizing her in social media platforms through their comments. They firmly believed that contestants such as Aranthangi Nisha, Rio raj and Soma shekar lost their individuality due to the excess amount of love poured by Archana on them. After getting evicted from the house, Archana announced that she is quitting from Twitter due to the trolls and criticisms.

Now, after seeing this statement from her, many fans started reacting in various ways. “When Archana said my career is done felt so bad” wrote a twitter user. Check out some of the reactions regarding the statetement of the TV host :

When Archana said my career is done felt so bad , I felt/feel for everyone, I adore so many qualities in each of them, because of one fandom many aren’t shining.. anitha words broke me down ..

She’s an anchor, when she’s hosting, audience should love her, should cheer for comments..That’s the engaging factor and I don’t think that would happen any time soon, but she’s a strong woman and she will bounce back soon in her career but I’m more worried about Rio, Bala, ramya

That’s horrible! This is totally unfair, even though I am not a fan! https://t.co/fncEzWq2yY

Yes .She is so down n silent. Not her usual self .When Sam came .Archana said My Career Is Over .Felt bad for her .

She was talking about reviewers feedback. Nothing such would happen. She has to accept that her strategy failed instead of running away from media.

Comment your views on this statement of Archana and the reactions of fans to it !!