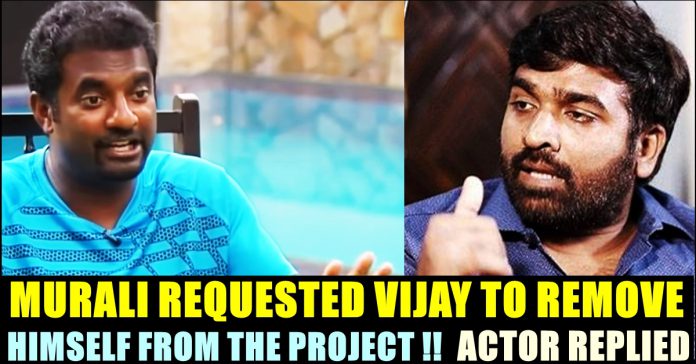 After releasing a long statement clarifying his stand, Muttiah Muralitharan released another press note requesting Vijay Sethupathi to remove himself from the project “800”. However, Vijay Sethupathi has made it clear that he is going to act in the movie as the story of it is convincing. Majority number of people in social media are expressing their disagreement over the project due to the past interviews of Muttiah Muralitharan.

Promotional posters of “800” didn’t go well with some of the celebrities of Tamil cinema along with a large number of fans. They trended hashtags such as “Shame On Vijay Sethupathi”, “Boycott 800” etc. They believed that Muralitharan is a person who supported Sri lankan government when people of Tamil eelam suffered due to the war situation. Despite of the press release from the production house, the agitation didn’t settle.

Muttiah Muralitharan himself came up with a press release explaining his stand in the issue. The cricketer said that he hesitated at first when the makers of it approached him for a biographical picture on his life history. “After realizing that the film would recognize people who helped my growth, I accepted to the makers of it” he said in his statement.

“We started our life as daily wagers in a tea garden in Sri lanka. Due to the war which took place for 30 long years, we upland Tamils are the first one to affect. As far as I remember, we always suffered a lot due to this war situation. My father was killed when I was 7. Many of my relative died. We lost our livelihood many times and suffered. I know the pain that caused by the war. The film “800” is about how I became a cricket player amidst this situation” Murali said who tried to make it clear that he never discriminated people considering their birth place.

Murali went on to explain how he helped the people of Eelam through his trust, foundations and by conducting cricket tournaments.. “Just because I was born in Sri lanka and achieved for that team, people are seeing me in a wrong way. If I born in India, I would have tried to find a place in Indian team. Is it my fault to born as a Sri lankan Tamil ?” he questioned.

Now, in a recent press release Muralitharan released a press not asking Vijay to leave the project. “I don’t like an artist like Vijay Sethupathi getting affected for choosing to act in my life story. Not that alone, I don’t want him to face hurdles in future for acting in my life story. So I ask him to remove himself from this project” Murali said in his statement.

Murali said that he hoped that the film will be an inspiration for the cricketers of future generation. “Now, barriers are taking place for that too. As the production house has promised, I hope they will deliver the project successfully combatting the hurdles” the cricketer said who thanked the media, politicians, film personalities, fans of Vijay Sethupathi and people of tamil nadu.

Check out his press statement below :

Update : It has been officially announced that actor/producer Vijay Sethupathi removed himself from the project “800 The Film”.

Previous articleVanitha Vijayakumar Sent Peter Paul Out Of Her House ?? Producer Reveals
Next articleRahul’s Reply To A Fan Who Called Him “Thala” Goes Wins Internet !!

Music composer James Vasanthan who has been letting his followers know about his thoughts about the ongoing Bigg Boss show, lately came up with...