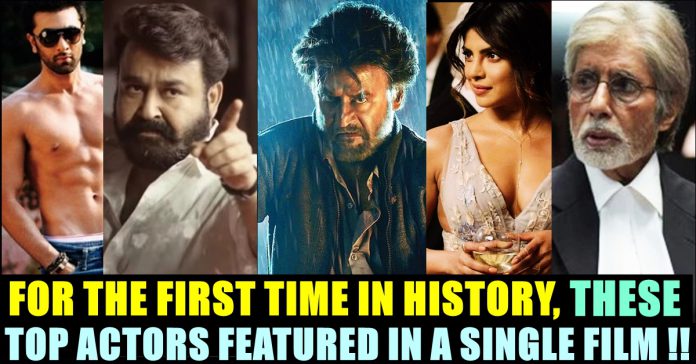 For the first time in Indian film history, high profile actors such as Rajinikanth, Amitabh Bachchan, Mammootty, Mohan Lal, Ranbir Kapoor, Chiranjeevi, Alia Bhatt, Priyanka Chopra featured in a short film to create awareness. The most special thing about the four minute long short film is, that none of the actors stepped out of their home but managed to tell us a humorous story, in a way of creating awareness to make people stay home.

Titled as “Family”, it also features Prosenjit Chatterjee, Shiv Rajkumar, Sonali Kulkarni and Diljith Dosanjh. The short film’s plot revolves around Amitabh Bachan misplacing his pair of dark glasses and everyone’s attempt to find it. All the actors shot their part at their homes respectively.

At the end of the film, Amitabh Bachan explains why and how they shot the short film. He called the entire Indian film industries as “Family” and said that the film fraternity would make donations to daily wage workers of the film industry, who are the most affected by the coronavirus lockdown. Sharing the video, Amitabh Bachan wrote “When you see that the cause is greater than the idea you dreamt of .. there is just immense joy and gratitude for all my colleagues and friends in the making of this historic effort ! WE ARE ONE and WE SHALL OVERCOME ! Jai Hind !”

T 3493 – When you see that the cause is greater than the idea you dreamt of .. there is just immense joy and gratitude for all my colleagues and friends in the making of this historic effort !

WE ARE ONE and WE SHALL OVERCOME ! Jai Hind ! https://t.co/WoquwkSyqT

As soon as getting released, this short film received large number of positive response from the fans and from the celebrities associated with film industry. Kajal Aggarwal said that she is loving the short film whereas filmmaker Karan Johar gave a huge shout out for the film.

This is so amazing! So brilliantly and cleverly told! So rightfully said that we are one huge family! A family that creates and entertains! We stand by each other through thick and thin! Salute to @SrBachchan and the entire team of actors and creators for making this!❤️❤️❤️ https://t.co/XcNbunGQCs

Comment your views on this brilliantly made short film !!

Previous articleBIGG BOSS STAR Slammed Kamal For His Letter To Modi !!
Next articleAjith Kumar Donated The Highest Amount For Corona Prevention From Kollywood ??

“If You Go To Smoking Room Again, You Will Be Evicted” – Bigg Boss Warned

Bigg Boss warned ADK, one of the contestants of the ongoing Bigg Boss show after he went to smoking zone despite the warning of...