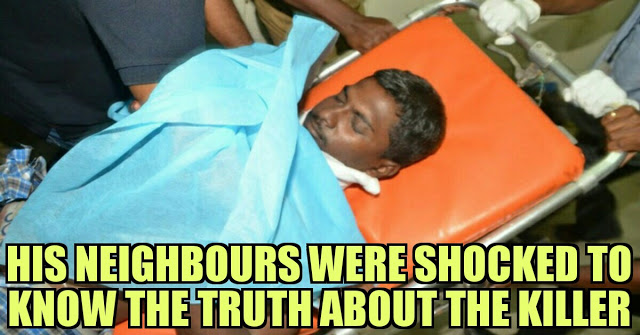 The suspect in Swathi murder case, P Ramkumar stayed at a mansion in Choolaimedu, less than a kilometre away from her residence.

Police teams secured the suspect from Alangulam in Tirunelveli district on late Friday night. Ramkumar reportedly attempted suicide by slashing his throat with a blade while police rounded him up. He has been admitted at a government hospital in Tirunelveli.
Ramkumar was a student of the Einstein College of Engineering, Tirunelveli. He graduated last year and was staying in the mansion for the past three months. Meanwhile, occupants of A S Mansion on 8th street, Choolaimedu, where Ramkumar has been staying for the past three months are in a state of shock.
“The police have been visiting our mansion since the day of the murder. We were never aware that the killer was amongst us,” Satish of Tuticorin who has been staying in the mansion for the past four years told Express. The occupants themselves learnt about a murder suspect living in their midst only on Saturday early morning.
“Our gates were locked up and we are not allowed to venture out of the mansion, even for our work. When we enquired, policemen told about the news,” Babu, an employee with Airtel said.
The mansion, the residents say has 60 rooms and more than 200 persons living in the Pigeon hole rooms. Some of the rooms have double sharing while others are four sharing rooms. “Ramkumar was staying in Room number 404 on the second floor of the mansion, a double sharing room. His roommate is absconding,” police sources said.
A picture of the the suspect’s image from the CCTV grab was pasted on a door in the ground floor of the mansion on the same day of the murder. That night Ramkumar fled the mansion. “It is a very big shock that we have been living amidst a murderer. They (police) showed a picture. But, we all work in different shifts and most of us don’t know the other occupants as people shift in and out regularly,” Satish told A police officer had stayed in Ramkumar’s room the previous night.
Police have sweeper his room and have secured documents from the room as well as from the mansion. Even though the occupants of the mansion Express spoke to, claimed that they haven’t seen Ramkumar, a man working in an eatery across the mansion said that he had interacted with Ramkumar. “He has dined at our eatery once, but failed to pay the bill,” recalled Mahesh.
There are a total of five CCTVs in the mansion. After committing the murder, Ramkumar stayed in the mansion for the day and left the city that night. Police sources said that the weapon he used to murder was brought from his native village.
S Swathi, an Infosys employee was murdered on June 24 by the suspect in Nungambakkam Railway station.
Source-TNIE