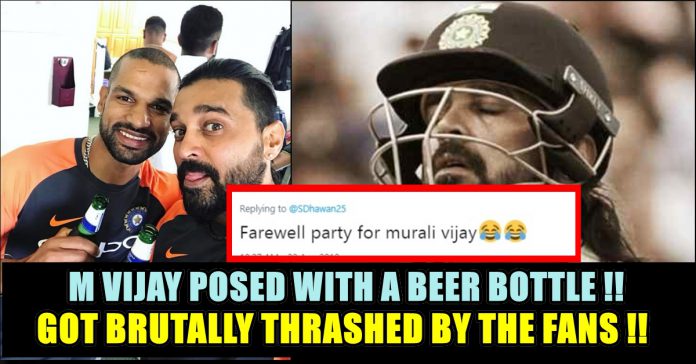 Murali Vijay Posed With A Beer Bottle As A Victory Celebration !! Fans Trolling Him To The Core !!

Murali Vijay has been dropped from the Indian team for the remaining two Tests of the five-match series against England.

Vijay was dropped after a disappointing outing with the bat in the first two Tests at Edgbaston and Lord’s. He was dropped from the playing XI for the Trent Bridge Test which India won by 203 runs to narrow England’s lead to 2-1 after three Tests. Vijay, who was India’s leading run-getter in England in 2014, aggregated 26 runs from four innings. Vijay was also in a woeful form when India toured South Africa earlier this year and has 6 single-digit scores in his last 11 innings.

Prithvi Shaw earned his maiden Test call-up while batsman Hanuma Vihari has also been added to the 18-member Indian squad.

Kuldeep Yadav, who played the second Test at Lord’s in place of Umesh Yadav, was also dropped from the squad. He will now be part of India A’s squad for two four-day matches against Australia A to be played at Vizag.

Also Vijay’s form outside the sub-continent has been wretched for sometime now even though he has a decent average of 39.33 across 59 Test matches. He has scored 3933 runs with 12 hundreds.

The 18-year-old Shaw, who had captained India U-19 to World Cup triumph earlier this year, is set to be rewarded for his consistent show in the first-class cricket. 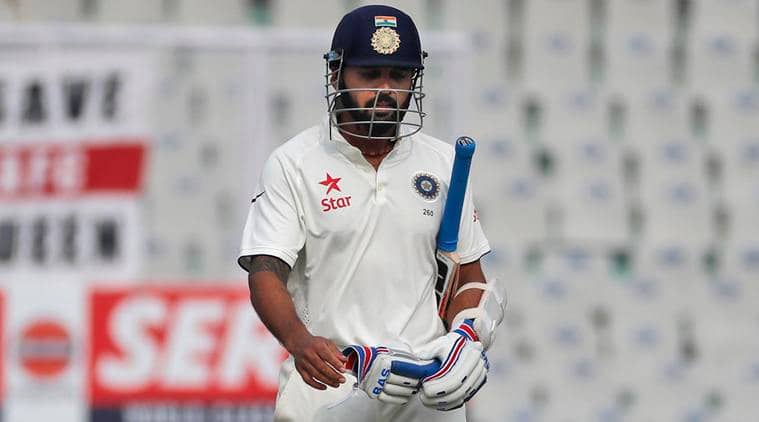 Shaw has scored 1418 runs in 14 first-class matches with an average of 56.72 and seven centuries. He was one of the star performers along with Vihari and Mayank Agarwal during India A’s recent tour of the UK.

He scored 188 in a first-class game against West Indies A in Beckenham and recently scored 136 against South Africa A in Bengaluru.

Vihari, a member of the 2012 U-19 World Cup team, has been a consistent scorer in Ranji Trophy and has also done well for India A in recent times.

Vihari enjoys a phenomenal average of nearly 60 in 63 first-class games with 5142 runs and 15 hundreds to his credit. During the tour of UK, he scored 147 in a List A game against West Indies A. He also had a half-century in a four-day ‘Test’ against the same opponents.

Recently, he also scored 54 and 148 in the two ‘Tests’ against South Africa A side at home.

The fourth Test between India and England will be played at Southampton from August 30.

Meanwhile he posed holding a beer bottle with his colleague Shikar Dhawan in which most of the cricket fans thrashed Vijay for his bad form in recent matches. Check out the picture here :

Here’s what fans has to say :

Missing Dinesh Karthik in this pic🤣

His contribution to sit on bench was immense.

What good he have done in this series?? 🦆 outs or what?

@BCCI @imVkohli should players be posting pics with alcohol with team t-shirts on? Sends wrong message to youngsters that it’s ok to booze.

You just won a test match . Why do you need celebration ? What for! @BCCI @RaviShastriOfc @imVkohli . Ask your boys to behave properly. The series is not over yet. Ashamed at your behaviour.

Previous articleAfter Mahat’s Girlfriend Announced Her Break Up With Mahat !! Pictures Of Yashika With Her Boyfriend Got Leaked On Internet !!
Next articleIs The 700 Crore Offer From UAE For Kerala Floods Is Real ?? Full Details Here !!