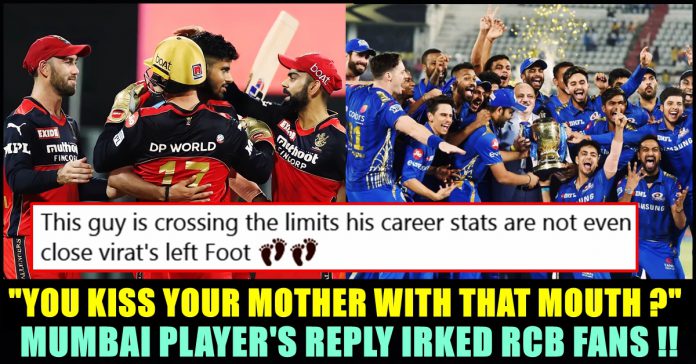 Fans of Royal Challengers Bangalore firmly believe that the ongoing season belongs to them as their favourite team has registered four straight wins in the first four games and topped the table with belly full of positive run rate. Now, a reply tweet of Mitchell McClenaghan who represented Mumbai Indians in the past, has irked the fans of the Kohli-led team.

Mitchell McClenaghan’s six year association with the Mumbai Indians team ended this year as the cricketer went unsold in the auction that took place during February month. He has been part of the Rohit Sharma-led outfit since 2015 and was released ahead of IPL 2021.

The franchise has always backed the Newzealand based pacer, despite him not playing for his country anymore. They roped him as a replacement in 2018 and retained him for the next two seasons as well. The left-arm bowler has been part of 4 title victories but didn’t play a single game in the 13th edition of the tournament. In 56 matches, Mitchell McClenaghan snapped 71 wickets at an economy of 8.49 but his strike rate of 17.94 with the ball has been impressive.

Currently, the cricketer is pretty much active in social media users, interactive with the followers of IPL. On Thursday, a twitter user who is a fan of RCB said that the Kohli led team will win this season. “Rcb winning this year’s ipl mark my words” his comment read.

Replying to him, Mitch, in a way of expressing his disagreement, wrote “You kiss your mother with that mouth?” Check out his reply below :

You kiss your mother with that mouth? https://t.co/4QkHuVdvrU

Many fans of RCB got irked on seeing this reply from him and started trolling him in the comment section. “Very very shameful answer from former MI player. You lost all the respect today” one of the comments of a fan read whereas another one said “This guy is crossing the limits his career stats are not even close virat’s left Foot”

Disliking a team is ok but not this comment. U lost my respect today man

Imagine you coming to RCB next year @Mitch_Savage 💀🤣🤣

Very Shameful 😷
How can A international player react like this shamee 😶

When a follower asked why Mumbai didn’t purchase him this week, Mitchel said that it is because he became too fat.

The cricketer predicted that Mumbai and Chennai would play the finals in the ongoing season.