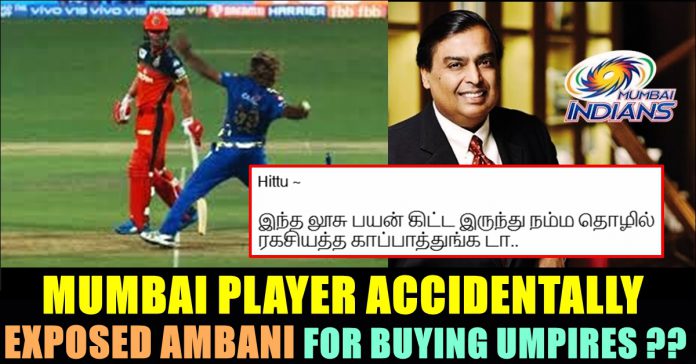 Mitchell Mcclenaghan’s reply to one of his follower in Twitter became a subject to online troll. Being a New zealand player, Mitchell represents Mumbai Indians in the Indian Premier League. The team outsmarted Chennai Super Kings in the final ball of last year’s finals and won the cup for the fourth time, most by any team in IPL history. Now, Mitchell who is involved in chatting with his fans in this quarantine period, said that his favourite team in IPL is “Umpires”.

McClenaghan made his IPL debut in 2015, when he was bought by Mumbai Indians for 30 lakh. He went on to take 14 wickets at an average of 22.50 in 10 appearances in the tournament. He also played with the franchise in the 2016 and 2017 editions. After going unsold in the 2018 auction, McClenaghan was selected by the Mumbai Indians as a replacement for the injured Jason Behrendorff.

In the “AskMitch” session, the cricketer ‘s replies to his followers who are mostly Indians, were in a devil may care attitude. To a fan who asked what he likes to eat in India, the cricketer simply replied by saying “Food”. When one of a fan asked “Which is your favourite team in IPL other than mi??”. To this question, Mitchell replied by saying “the umpires”. This reply from the pacer received immense attention and got more than three thousand likes and several shares which highest compared to all his replies.

Many fans of other IPL teams started making fun of this reply of Mitchell as there is a belief among them that the blue team which is owned by Ambani family bought umpires to win crucial games. Check out some of the replies this tweet received :

Bt they are your own teammates no!🥺

Umpires are from MI only Sir !!!

Check out some of the other replies of Mitchell to his followers :

IPL tournament for the year 2020 has been postponed till April 15 due to the Coronavirus crisis. Comment your views on these replies made my Mitchell !!

After a long trip with her live-in partner, Nayanthara returned to Tamilnadu and started her spiritual journey it seems. Nayanthara is one of the...

Being one of the busiest actor in Kollywood, Vijay Sethupathi has half a dozens of films to be released. He also involved in producing...