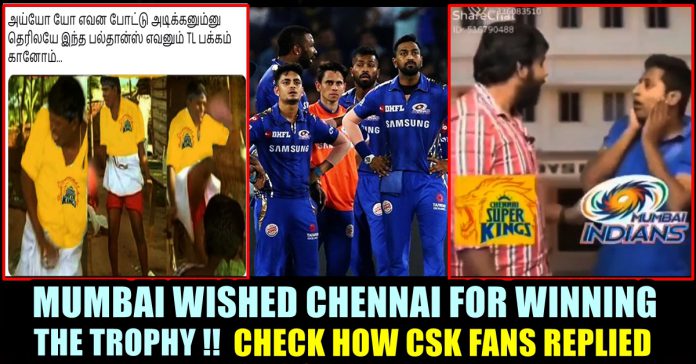 Along with the enormous number of fans and celebrities, team Mumbai Indians also wished Chennai Super Kings for winning the IPL trophy. Fans of the winning team who were in the celebratory mode, started trolling the former Champions due to the rivalry both the team enjoying between each other. Mumbai Indians had won 5 trophies so far in the entire IPL tournament.

Team Chennai Super Kings won the IPL trophy for the fourth time in the 14 editions and made fans extremely happy. From finishing the league stage at 7th spot in IPL 2020, the team managed to lift the trophy by making a solid come back in the next season. The Dhoni led team comfortably won the match against Kolkata Knight Riders in the finals by 27 runs and won the winning cash prize of Rs.20 crores.

In the post match presentation, Dhoni gave credits to team KKR for the way they throughout the tournament. He also credited them as a “deserving” team to win the trophy for the performances they pulled out to reach finals. The former Indian captain who is going to mentor team India in the T20 world Cup, also hinted that he will be playing the next season by saying that he hasn’t left the legacy behind still.

Meanwhile, team Mumbai who got eliminated in the league stage, came up with a tweet in their official social media handle wishing the winning team. “Congratulations @ChennaiIPL on winning #IPL2021 💛🏆” read their tweet.

Check out the tweet of Mumbai Indians and CSK’s reply to it below :

However, fans who were in a mood to troll anything that comes in their way, started trolling the former Champions. Many said that the team must be suffering inside while wishing Chennai. Meme videos and funny comments also flooding in the comment section of Mumbai’s post.