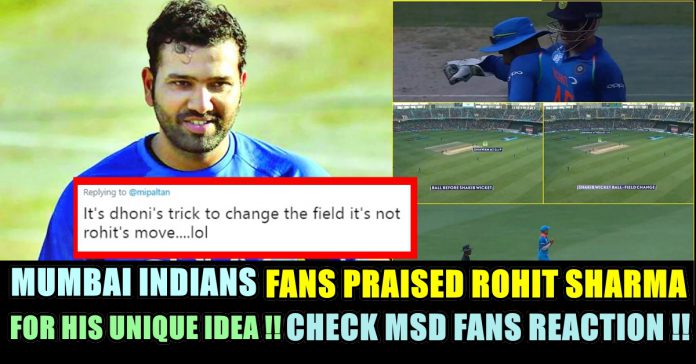 The Super Four stage of the Asia Cup 2018 got underway today with all the four teams in action. The Indian team having won both their group matches met Bangladesh in Dubai. The Bangladeshis were asked to bat first as Team India wanted them to set a target. Shakib Al Hasan was out there in the middle as early as the fifth over as they lost Liton Das pretty early in the innings. He got off to a rapid start but his stay was short-lived as MS Dhoni and Ravindra Jadeja executed his dismissal with perfection.

It was the 10th over of the match, Jadeja who replaced Hardik Pandya in the XI was already in action. Shakib had crashed the second ball which was a free-hit through the off-side for a boundary, he swept the next through square-leg and now had two fours in the over. Skipper Rohit Sharma had quite an attacking field with a slip in place and wanted to add pressure on the batsman. Former Indian skipper MS Dhoni who was standing behind the stumps realized that the left-hander would like to play more deliveries towards the on-side and thus went up to Rohit for a chat. He suggested that Shikhar Dhawan standing at slip be moved out and rather placed at square-leg.

Guess what happened on the very next ball. Shakib failed to realize that there was protection in place now and played the repeat shot, the ball wasn’t full enough but he went for the sweep and hit is straight into Dhawan’s hands. It was as easy a wicket as it gets. 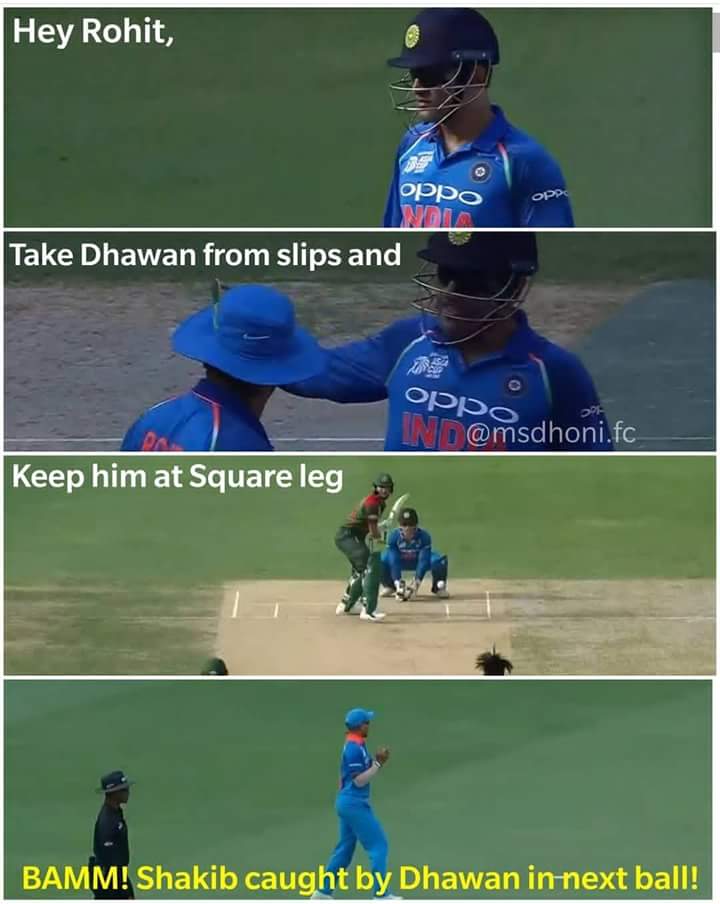 Shakib was a crucial wicket for the Indians as the all-rounder has the ability to take the game away. He already had got off to a start with 17 runs from 12 balls but Dhoni’s tactical thinking once again beat the batter and it proved to be a huge blow to the Bangladeshis. They struggled all the way through the innings and after 37 overs have just 119 runs on the board for the loss of 7 wickets.

Dhoni has left captaincy but his decisions are still beneficial to the team. Often, we see him give valuable tips to the team, especially Virat Kohli.

Be it changing fields or giving DRS, Dhoni is too good. Even other players love taking his opinion. Today, during the match of India against Bangladesh, we came across an interesting conversation between Mumbai Indians and Chennai Super Kings. Well, it was getting difficult to take Shakib Al Hasan’s wicket and this is where Dhoni came to the rescue. He told Rohit Sharma to change field and it worked wonders. Shikhar Dhawan was seen placed inside at the leg side inside the circle.

This field change helped to take the big wicket. Mumbai Indians was happy to see this and as expected, they praised their captain Rohit Sharma for his wit.

Here’s what they tweeted;

Smart captaincy from Rohit Sharma who moves Dhawan to square leg citing Shakib’s intentions. Jadeja sticks to his plan and forces Shakib to sweep, who holes out to Dhawan. Brilliant from India!

They wrote, “GONE!Smart captaincy from Rohit Sharma who moves Dhawan to square leg citing Shakib’s intentions. Jadeja sticks to his plan and forces Shakib to sweep, who holes out to Dhawan. Brilliant from India!”

However the official page of Chennai Super Kings and the fans of MS Dhoni noticed the real reason behind it and pointed out that the idea was Dhoni’s. They reminded them that Dhoni was the mastermind. :

It was Dhoni’s decision BTW.

Dear,
MI please remove your hypocritical statements and don’t become a selfish because of this strategy implemented by Dhoni so Rohit is good captain but Dhoni dose this 🙏

On the lighter note pic.twitter.com/KFxWZtBv7C

You forgot to mention MS Dhoni , he was the one who adviced Rohit to move Shikhar to square leg! That was smart captaincy by Dhoni ✌🏻

Haha what ever , but dhoni is the boss lol , check video dhoni advising to rohit and then talk !

@mipaltan watch cricket and put tweet… Its msd not rohit

“What Should I Do With This Rose ??” Student Slammed Government !! WATCH

A student who returned from Ukraine slammed the Indian government for not taking precautions on saving him and other students who were stranded in...

Fan Directly Sent A Letter To ICC To Remove Sanjay Manjrekar !! Check Why !!

Sanjay Vijay Manjrekar is an Indian cricket commentator and former cricketer. He played international cricket for India from 1987 until 1996 as a right-handed...