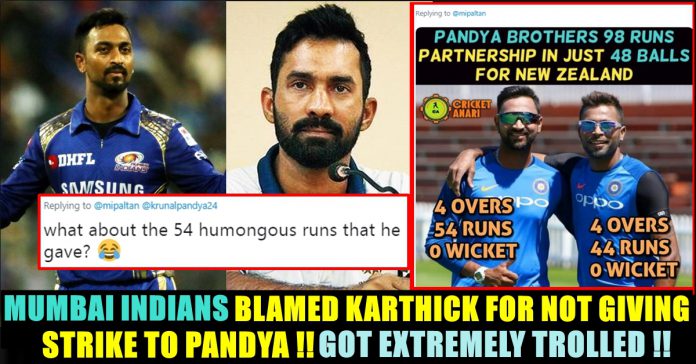 The Indian men’s and women’s teams suffered heartbreaking defeats in their respective T20I matches on Sunday and will have to now head home in disappointment.

The men’s team fell short by 4 runs as they failed to chase down a mammoth 213-run target against Kane Williamson’s side, who clinched the series 2-1 as a result. India needed 16 runs off the final over in their run chase but they could manage to score 11 runs with Dinesh Karthik and Krunal Pandya making a fist of the total despite the loss of wickets early on.

When India needed 14 runs off 5 balls, Karthik played out a dot ball off Tim Southee and in the next ball he hit the ball towards long-on but sent Krunal Pandya back when the latter wanted to rotate the strike. Karthik managed only a single in the next ball and thereafter, it was a mountain to climb for India. The Tamil Nadu cricketer hit a six off the last ball, but it was too late.

Now, Indian Premier League (IPL) side Mumbai Indians have taken a jibe at Karthik for refusing to give the strike to Krunal in the last over despite the all-rounder scoring 25 runs off 12 deliveries at that moment.

“.@krunalpandya24 26 not-out from 13 balls and got to face only 1 ball in the final over. Hard luck, KP! #CricketMeriJaan #NZvIND,” stated the Mumbai Indians official Twitter account.

What about match loosing bowling figures by KP???

He gave 54 runs with the ball and Rohit consumed so many balls. Highlight that as well 😂🤣😜

KP ?? Anyone says KP and the only person my mind thinks of by default is one & only KP – Kevin Pietersen.

You’re subtly blaming DK I guess… @msdhoni and @SDhawan25 should have hit some more runs, it would have been easy for the pair…

If Rohit Sharma had consumed fewer balls,may be KP might have got few more in the end…Just saying

What the hell ? How could u b assure that krunal was all about to Finish the match ? DK also was on 33 on just 16 balls nd both were playing for country not for any Ch**tiya Ipl franchise like you. Yes this lose hurt us but thats okay it was just a Match #NZvInd Jai Hind 🇮🇳🇮🇳

Previous articleHilarious Reply From Priya Anand To The One Who Asked About Her Future Project !! Check Out !!
Next articleMan Left His Family With Pregnant Wife Because Of PUB-G !! Shocking Report !!

Tamil Nadu BJP leader S. VE. Shekher Venkataraman, an actor and playwright, has provoked anger by sharing on Facebook a post that disparages the...