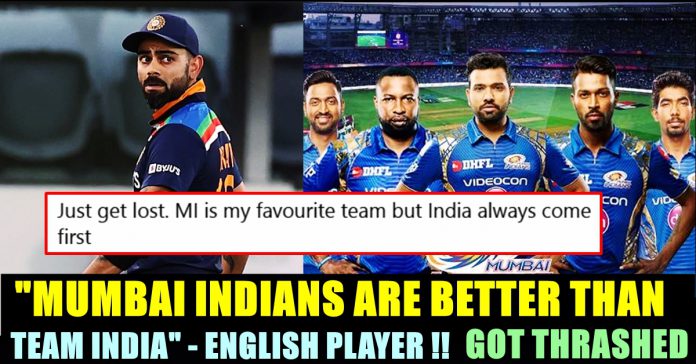 England defeated India in the first twenty 20 quite effortlessly. The poor batting of the home team led to a disastrous loss despite of having a good momentum of winning the test series. The visitors won the toss and asked team India to bat first and restricted them for just 124 runs. They chased the total by having 8 wickets in hand with 5 plus overs to spare.

On seeing the performance of team India, Michael Vaughan who is known uploading controversial tweets against team India, came up with a tweet saying that Mumbai Indians IPL team is better than entire team India. As usual, his tweet became a subject to massive online troll and former Indian opener Wasim Jaffer’s reply tweet stood the top of all.

“The Mumbai Indians are a better T20 team than Team India !!! #JustSaying #INDvENG” read Michael’s tweet which garnered 20 thousand plus likes in no time.

The @mipaltan are a better T20 team than @BCCI !!! #JustSaying #INDvENG

Mumbai Indians led by Rohit Sharma have won five IPL titles so far. However, the predictions Michael Vaughan did in the past has always became a subject to massive online troll as it would completely go wrong. Now, on seeing this statement from him against team India, fans highly believe that a 4-1 in favour of team India is on cards.

Wasim Jaffer, former Indian test opener who is busy entertaining his twitter followers through his hilarious cricket memes nowadays, came up with a reply to Michael saying that not all teams are lucky enough to play four overseas players Michael by adding a smirk emoji. He indirectly trolled the fact on how team England management managed to appoint players from different countries to represent their team.

“Not all teams are lucky enough to play four overseas players Michael. #INDvENG” read the reply tweet of Jaffer. His tweet was backed by 50 K plus Indian fans which is the double the amount of likes garnered by Michael for his tweet against India.

Check out some of the other reactions from the fans for the baseless tweet of the former English cricketer :

Suryakumar Yadav is a Better Batsman than you.

Just get lost. MI is my favourite team but India always come first

First of all, @MichaelVaughan bring pure england team to play.

This is India ❤️

We MI Fans Will File A Case against Panoti Man Michael Vaughan , if MI Will Not Qualify For Playoff this Year

Previous article“You Resemble This Guy” – Abbas’s Colleague After Seeing Him In “Kadhal Desam” !! Check What He Has To Say
Next articleVijay Sethupathi Shed Tears After Seeing His Director’s Health Condition !!

Jayalalitha’s Biopic Title Released !! You Will Be Shocked To Know Who Is Playing The Lead !!

Director A. Priyadhaarshini said that the film would go on the floors on Jayalalithaa’s birthday on February 24. The poster of former Chief Minister Jayalalithaa’s...