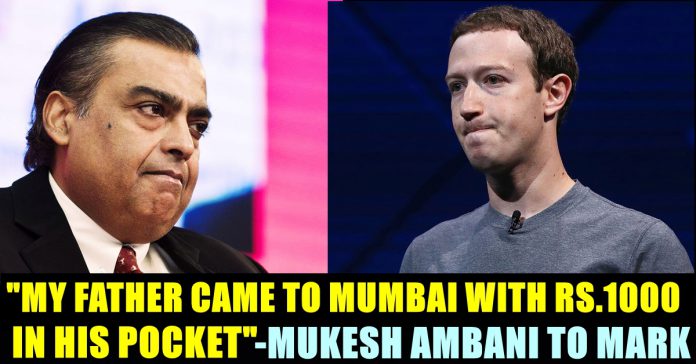 Facebook’s chief Mark Zuckerberg and Reliance Industry’s head Mukesh Ambani had a conversation on Tuesday at the Fecbook Fuel For Indian 2020 event. In April 2020, Facebook purchased a 9.9 % stake in Reliance Industries Limited’s telecom unit Jio for $5.7 billion which is Rs. 43, 574 crore. In their conversation that took place on 15th of December, they spoke about the partnership between Reliance and Jio, highlighting how each of them benefit from the association. Small businesses and supporting them is a key focus of Facebook and Reliance Jio’s partnership in India, said Mark Zuckerberg at the event.

During the conversation, Mark Zuckerberg, at a point praised Dhirubai Ambani, father of Mukesh Ambani, who in a way, was at the root of the Reliance Jio story. Mark said that Dhirubai has an incredible legacy in India and declared that the story of himself founding Reliance Industries is one of the greatest business stories in the history.

“I have read that, he once held up a postcard in his office and said, If every Indian could speak with each other at the cost of this postcard, where will India be ? And now you clearly had a vision for where things were heading in the country, and because today Indians can communicate with one another for less than the cost of a post card, and that’s what we have tried to do with messaging” said Mark to Ambani.

Answering to his question, Ambani revealed that his father was the son of a school teacher. Dhirubai Ambani came to Mumbai with just Rs.1000 in his pocket in 1960. He established Reliance with the belief that he would invest in the business of the future and in talent. Ambani said that he learned three things from building reliance. The first one is, that an entrepreneur must have courage and self belief and said Mark is a best example for that in the last 2 decades. “There can be no better person to demonstrate that in the last couple of decades that you Mark” he said who believed that entrepreneurs don’t succeed in the first attempt and self belief comes only when he fails.

The second thing Ambani learned from his father is to have empathy and creativity in everything you do, while succeeding. “By empathy, I mean, put yourself in the other’s shoe and make them feel how you would want to feel” said Ambani. He further said that the importance of relationship, trust and loyalty is the third thing he learnt from his father.

“The whole reliance right now, with hundreds of thousands of people, is one big family. We are not related by birth but we really woven together by passion, purpose and conviction. We have faith in one another” said Amani who concluded by saying “He will still be the founder, if we follow his vision in terms of investing in business of the future”.

Why BCCI Denied The Annual Central Contract For T Natarajan ?? Check Out

On Thursday, The Board of control for cricket in India has announced the Annual Player contracts for Team India for the period from October...

Tamil Actress Said That She Can’t Vote This Time !! Got Thrashed

Tamil actress Kasthuri who is pretty much active in social media platforms, is known for providing her political opinions and views through her tweets....