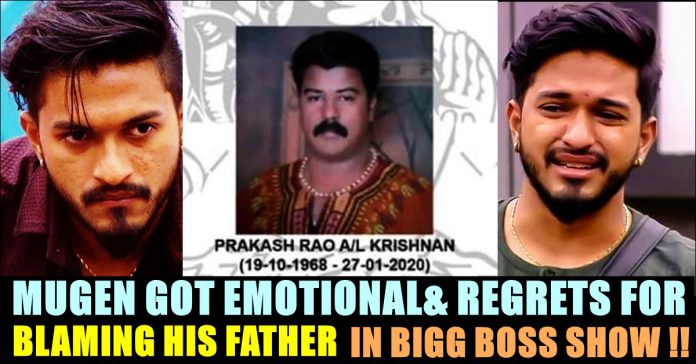 Mugen Rao appeared in social media for the first time after the demise of his father Prakash Rao. The 52 year old man died due to heart attack according to sources. Mugen is the winner of Bigg Boss season three hosted by Ulaganayagan Kamal Haasan. His father passed away in Malaysia after suffering a cardiac arrest around 6 : 30 PM on Monday. The last rites took place in Malaysia.

This loss of the young sensation left almost every participants of Bigg Boss season three in deep sorrow. The 24 year old Mugen Rao broke the stereotype and became the first contestant to win the title after winning ticket to finale task. Mugen Rao often addressed his father during his participation in the game show and is devastated by the loss of the one who encouraged him to chose his field he wished.

Now after few days, Mugen has now came up with an emotional post in his official Instagram account, in a way of remembering his father. Mugen who has more than 12 lakh followers in Instagram wrote “If you have heard me sharing the tough part of my life, this is definitely the toughest. The man whom I got my genes, traits, talent, look, skills and life from. My dad is no longer with us and has departed to the almighty” worote Mugen in his Instagram story. Mugen is indeed mentioning the episode of Bigg Boss where he said that the quarrel between his father and mother mentally disturbed him. He regrets for blaming his father in this episode which is evident through the screenshot below.

“Thank you from the bottom of my heart to all who poured your condolences, concern, care and wishes. Can’t express how deeply grateful I am for all your love and strength.” the story of Mugen further read. “I love you Dad, and will always be your grateful and humble son. Difficult but will soon movie on as I have got work to accomplish, with your blessing” he added.

Followed by this post, the model and singer even posted a series of pictures of himself with his father in his remembrance. Check out them below :

Along with his several number of fans, The co-contestants of the young sensation expressed their condolences through their social media accounts. Cheran, one of the senior participant of the show said that his Bigg Boss win took place only for the happiness of his father.

Meera Mitun, Vanitha Vijayakumar, Abhirami Venkatachalam are the others who consoled Mugen to be strong through their social media posts.

“Kamal Should Do Like This” – Fans After Watching This Video

On seeing a video of Hindi Bigg Boss show host Salman Khan cleaning the dirty Bigg Boss house while contestants were pleading him not...