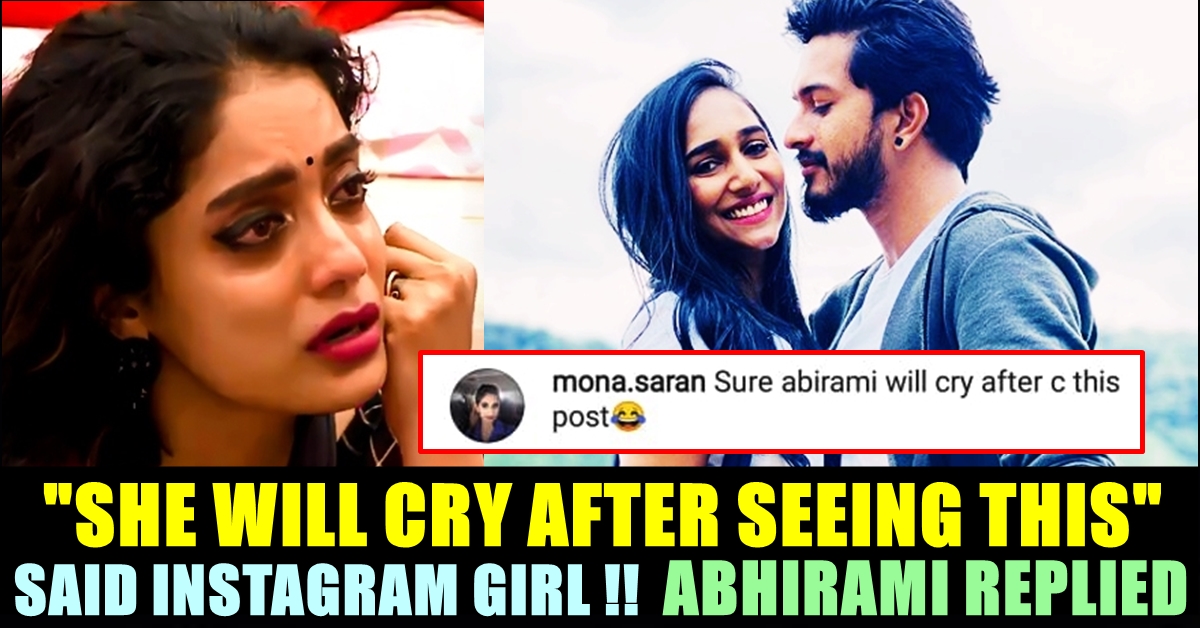 The triangular love tale of Mugen Rao, Yasmin Nadiah and Abhiram Venkatachalam needs no introduction. Since Bigg Boss show, Mugen who made it transparent about his love interest on Yasmin, a Malaysian model, won the trophy by grabbing the highest number of votes. Abhirami Venkatachalam who is one of the co-contestant of Mugen expressed her love towards him while being inside the Bigg Boss house. Mugen said that she is seeing Abhirami as friend and he revealed that he is in love with a girl named as Sparkle aka Yasmin.

While proposing him Abhirami said that she didn’t want Mugen to accept her love proposal. “I am happy now. I am just living the moment” she said to Mugen which was released as promo in Vijay Television.

The “Nerkonda Parvai” actress received severe criticism from a set of fans of Bigg Boss show for proposing Mugen. After getting out of Bigg Boss house, Abhirami, in an interaction with a popular youtube channel said “I even wanted to talk to that girl about how it will be exaggerated in a public forum. I wanted to tell her how good is Mugen as a person. But going by what Mugen said to me, they are not in a relationship yet. He just proposed her before entering the Bigg Boss house. It is not even a relationship and she is not even his girlfriend yet.” (Also Read : Abhirami Wants To Talk With Mugen’s Girlfriend After Coming Out Of BB?? Watch Video !!)

Now as the afterlife of Bigg Boss contestants are very much visible, we can evidently see Mugen being involved in a relationship with Yasmin. Yesterday, on Valentine’s day, Mugen uploaded a romantic post of himself with Yasmin in which both of them looked extremely adorable. He expressed his love emotions through the caption of his Instagram post.

Happy valentines day folks 🔱 Enjoy your day with your loved ones . Dear sparkle, I just want you to know that you mean a-lot to me and I appreciate everything that you’ve done and still doing. My Love for you is without boundaries. Thanks pappu for the 🌹 Happy valentines day ❤️ Xoxo Rawr

In a way of replying to this online user, Abhirami who is currently busy in signing movies and conducting photoshoots took her time and wrote “of course not , m really happy for him … and yes happy Valentine’s Day to you too”

Abhirami has signed a film of actor Aari along with Losliya and Mugen Rao is yet to announce about his debut project in tamil. Comment your views on this reply made by Abhirami to the follower !!