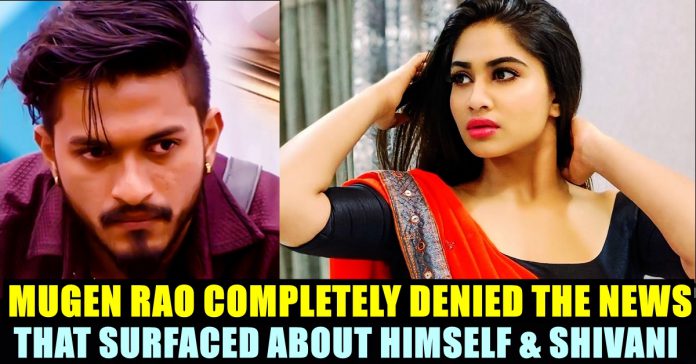 Mugen Rao, title winner of Bigg Boss season three nodded a big “No” to the news that linked him with Instagram sensation Shivani Narayanan saying that they both are going to appear together in a movie. The malaysia based model said that he will update about his upcoming projects straight to his fans and followers and asked them to wait.

Mugen won the title by a big margin of 2 crore votes. Originated from Malaysia, the singer and aspiring actor has already gained a separate fan following in Tamilnadu for the way he behaved inside bigg boss house. Known for his short temper, Mugen lost it couple of times inside the house and both the time he did it infront of Abhirami Venkatachalam, actress of Nerkonda Parvai.

Now, as the next season of Bigg Boss has emerged, Mugen is yet to update about his debut project in Tamil film industry. Meanwhile, a report emerged saying that Mugen is going to a film directed by “Veppam” fame Anjana Ali Khan. The update said that Mugen is going to pair with the 19 year old Shivani Narayanan who is setting the Instagram feed on fire with her glamorous pictures.

Now, denying the news, Mugen uploaded a story in his official twitter account saying that it is a fake news. “I will update straight to you guys only movies and projects. Stay tunes and much love” he said in the story. “Thanks for all the wishes and concern” he added.

Check out the screenshot of Mugen Rao’s Instagram story here :

Mugen who appeared in the reality shows of Vijay TV after winning the title, is very much busy updating about his daily routines to his followers through his Instagram posts. Check out some of his recent posts below :

Have a good day ahead folks 🤟🏼

You are being presented with two choices : EVOLVE or REPEAT .

Shivani, who hasn’t opened about the news yet, is busy engaging her followers with her glamorous posts. The 19 year old actress has already gained enough attention from the youth and is highly expected to participate in the fourth season of the Kamal Haasan hosting show.

Sivakarthikeyan’s “Hero” movie released across the world yesterday. The film directed by “Irumbuthirai” fame P.S Mithran talks about the flaw in the educational system...

For involving in a conversation with actress Samantha and director Nandini Reddy through which they trolled actress Pooja Hegde, Singer Chinmayi is being questioned...

A 20-year-old Indian girl here upset over comments mocking her picture on social media planned to commit suicide and live stream it, but was...