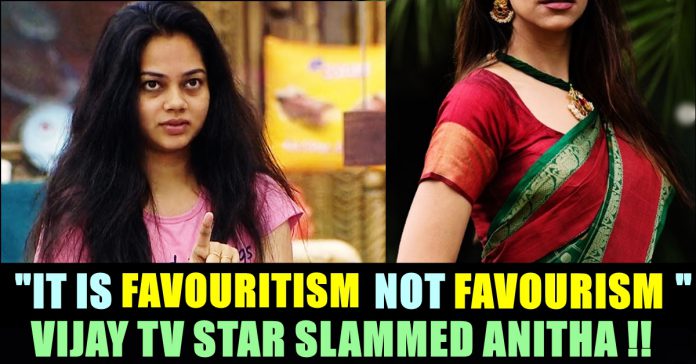 Anchor Bhavana who is known for hosting shows in Vijay television, got literally fed up on seeing the contestants of the ongoing Bigg Boss show using a non-existing English word repeatedly which having a conversation or argument between themselves. She who desperately wants someone to correct them , felt that kids who are watching the show could pick up wrong English from them.

Bigg Boss season 4 which is being hosted by Ulaganaayagan Kamal Haasan, had gone past 70 days. So far 8 contestants including Rekha, Vel Murugan, Suresh Chakravarthy, Suchithra, Samyuktha, Sanam Shetty, Jithan Ramesh, Aranthangi Nisha got evicted from the show due to receiving less number of votes from the audience. On Monday, when Bigg Boss asked each participant to nominate two housemates, everyone nominated their co-contestants with reasons.

Throughout the episode the word “favourism” was used by Anitha several times. While having an argument with Rio after the nomination process, Anitha said that Rio sent her to jail by involving in “favourism”. Replying to her allegations, Rio also started using the same word. However, Rio pronounced the word correctly till talking with Anitha. Som shekar also the same word while talking with Archana. On seeing them using the wrong word repeatedly, Anchor Bhavana who is enjoying five lakh plus followers in Instagram, uploaded a story expressing her frustration over the Bigg Boss contestants using a wrong word repeatedly. She wanted to make it clear that the word is “Favouritism” and not “Favourism”.

Bhavana who felt that they are using the word wrongly for a long time, wanted someone to correct them. “Guys. This has gone on for too long. There is no word called “FAVOURISM”. It’s FAVOURI-TI-SM for crying out loud. Why isn’t anyone correcting them ? We don’t want kids to pick up wrong English while watching the show” Bhavana’s story read. She also added a hashtag saying “Mudila da Saami” venting her emotion out.

Previous articleHave You Ever Wondered Why Train Coaches Have These Stripes ?? MUST READ
Next article“Pandiyan Stores” Venkat Got Upset On Seeing This News On Chithra’s Death Case !!