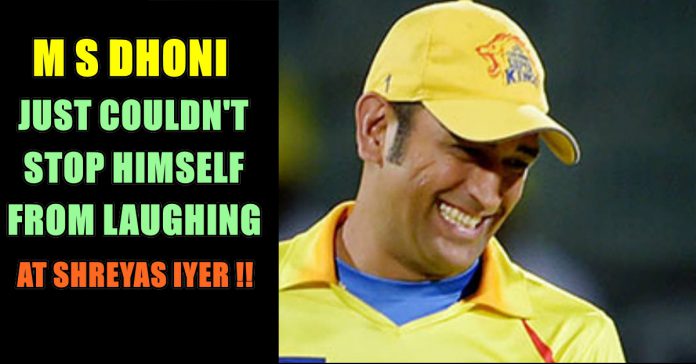 The IPL , being the gleeful extravaganza it is, never ceases to surprise or amuse its viewers. Most of the incidents happen in the match, but few of them happen before or after the matches as well, like it did in the CSK vs DD match in Delhi. Before Chennai Super Kings and Delhi Daredevils locked horns in the 52nd match of the Indian Premier League on Friday, a funny incident during the toss left CSK captain MS Dhoni in splits – a scene that is not often seen on the field. After Simon Doull introduced the two captains at the centre of Feroz Shah Kotla stadium in Delhi, the host captain Shreyas Iyer flipped the coin, but it landed a few feet away from where they were standing. Seeing what has happened, Dhoni could not help himself but have a hearty laugh. The commentators joined in too because it is not always that you see someone doing the toss wrong.

However, the toss was still considered valid. Chennai won the toss and Dhoni elected to bowl first as he often does because of his team’s undeniable ability to chase. Unfortunately, it did not work out for the yellow brigade today, as they lost the match to DD by 34 runs. A win could have meant cementing their position in the top two of the league table for CSK, while there was nothing to gain or lose for DD since they are already out of the race for playoffs. After winning the toss, Dhoni explained what he took away from the wicket’s condition and also mentioned team changes.

“There are chances of the wicket deteriorating. That’s a chance we have to take. It’s important to learn from each game. Every game gives you an opportunity to improve. We don’t want to miss the key players when it comes to the knockouts. Lungi comes in for David Willey,” Dhoni said. Before the match, Iyer had posted a heart-touching tribute for his idol Dhoni on Instagram, saying how much it meant for him to play in the same tournament as him.

“I was just 10 years old when Mahi bhai made his debut for Team India. Have always looked up to him as a leader and as a player. Standing besides him for the toss the other night in Pune was unreal. Tonight is another such night. Wish us the best and come support us at Kotla.” the post said.

I was just 10 years old when Mahi bhai made his debut for Team India. Have always looked up to him as a leader and as a player. Standing besides him for the toss the other night in Pune was unreal. Tonight is another such night. Wish us the best and come support us at Kotla. #DDvCSK #IPL2018 @mahi7781