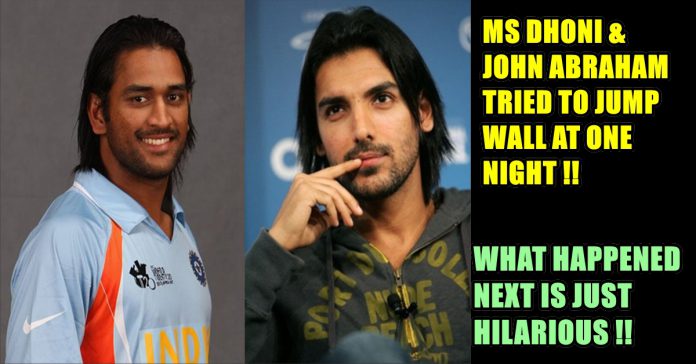 John Abraham is back on the big screen today with his film Parmanu: The Story of Pokhran. The film, based on India’s nuclear tests in Pokhran in 1998, is in theatres today and stars John and Diana Penty in the lead roles.

During the promotions of Parmanu, John narrated an interesting anecdote about cricketer Mahendra Singh Dhoni and how his fitness bowled Bollywood’s fittest man over. “We once went to my office to get the bikes out and found that the watchman had fallen asleep and the main gate was locked. So, we both jumped from the side and went in,” said John.

“But while coming out, we had to go over the gate. I don’t know how he did it, but in a few jumps, he made it over the gate easily. I thought if Mahi can do it then so can I, so I ran and did the exact same thing. My pants got stuck in the gate and tore,” narrated John. John and Dhoni are thick friends and well-known bike enthusiasts. The two take time out to meet each other and take their favourite beasts out for a spin. During the promotions of his film Shootout At Wadala (2013), John had said in an interview how Dhoni was oen of his closest friends.

“I follow cricket as and when I have the time. Besides that (MS) Dhoni is one of my closest friends, so even if I wanted to I wouldn’t be able to stay away from cricket,” John said, when asked why he was invested in sports like football but not as involved in cricket.

Previous articleArvind Swamy’s To Take A Massive Decision On His Career !! : You ll Be Shocked To Know This !!
Next articleA B De Villiers Just Unfollowed RCB In Twitter : Do Something Caught Between Him & The Management ??

Plight of women who are trying to travel alone in this place that is filled with predators is a state of worry for a...

MS Dhoni’s swashbuckling 84 went in vain as Royal Challengers Bangalore edged past Chennai Super Kings at home in a last-ball thriller on Sunday...