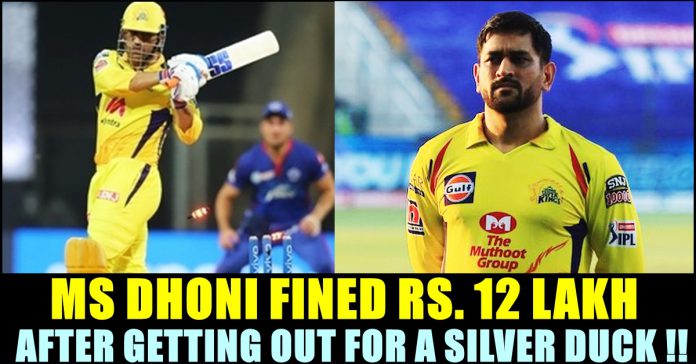 Team Chennai Super Kings started the tournament with a loss against Delhi Capitals led by Rishabh Pant. Unfortunately, Captain MS Dhoni who is making his come back after IPL 13, got out on the second ball he faced. In a way of adding fuel to the fire, a latest report surfaced saying that Dhoni has been fined Rs. 12 Lakh by the authorities of Indian Premiere League.

DC openers Prithvi Shaw and Shikhar Dhawan hammered 138 runs for the opening wicket with both batsmen scoring scintillating half-centuries and helped their team to register the first victory. Chennai Super Kings posted 188/7 after Sam Curran was dismissed for 34 on the final ball of the innings. Curran and Ravindra Jadeja added 51 runs in 27 balls after Avesh Khan cleaned up MS Dhoni for a duck. Suresh Raina was the star of the show hammering 54 runs before getting run out.

Despite of CSK’s huge score, Delhi won the match quite comfortably due to the poor bowling attack of the Dhoni led team. Now, it has been reported that Dhoni has been fined by BCCI for the slow over rate of his team. As the blunder made by CSK for the first time in the IPL 2021, the skipper was spared but if it happens a couple of times more, he may get suspended for one or two matches, said reports.

To act according to the rule, a team must bowl 14.1 overs in one hour. If a team commits the slow-over rate mistake the second time, the skipper will be forced to pay Rs. 24 lakh as fine amount along with each members of the team paying Rs. 6 lakh as fine or 25 % of their match’s salary.

If a team found guilty for the third time, the skipper of the team should pay Rs. 30 lakh as penalty and he will be banned from one match. The rule also requires each player to pay Rs. 12 lakh as fine or 50 % of their match salary if their team commits the mistake of slow over rate for the third time. Team Chennai Super kings is going to face Punjab kings in their second match which is scheduled to take place on 16th of April.