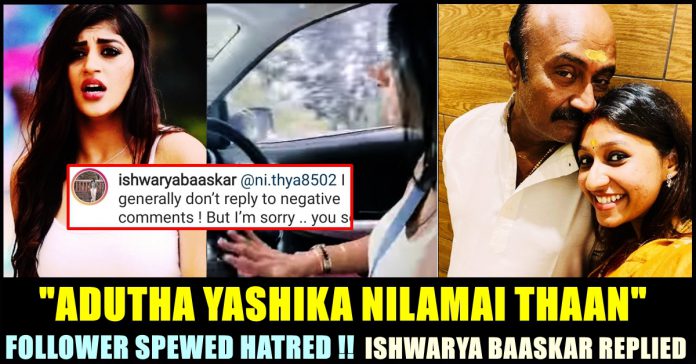 Ishwarya Baskar, daughter of veteran actor MS Baskar reacted to a negative comment that was made on her recent Instagram post in which she could be seen driving her car. The Instagram user whose handle name goes like “Nithya 8502”, spewed hatred at Ishwarya, saying that she would suffer like actress Yashika who is currently getting treatment after meeting an accident. Ishwarya who said that she generally wouldn’t react to negative comments, felt pity for the family and friends of the user for having such horrible person in their lives.

Being a reputed dubbing artist after dubbing for top tier heroines such as Rashmika Mandanna, Rakul Preet Singh etc, Ishwarya Baaskar has also appeared appeared in youtube sketch videos as well. She is pretty much active in the photo/video posting social media app by uploading the pictures and videos of herself. Check out some of her recent posts below :

Ishwarya who recently got married, uploaded a video of herself driving car on her birthday. She added the video with a caption saying “To silence and peace 😊” and the video showed the veteran’s daughter driving the car in a tourist site with an audio saying that she prefers to be alone rather than giving her time to people who don’t deserve it.

Many of her followers wished her “Happy Birthday” to make her happy on the special day of her life. However, a follower chose to spew hatred at Ishwarya by referring to her video with an horrific incident that happened to actress Yashika who lost her friend and suffered severe injuries. “Adutha Yashika Nilamai Thaan Pola” screen shot of the now-deleted comment of the user reads which means “It looks like you are going to suffer like Yashika next”

Reacting to this comment, Ishwarya Baskar said that feels sorry for her as she seems really horrible. “I generally don’t reply to negative comments ! But l’m sorry .. you seem to be a really horrible, you have so much hatred in your heart and negativity in your thoughts! I pity your family and friends for having someone like you in their lives! Hope you get help and lead a more positive life! Tc !” Ishwarya said through her reply.

It is high time for people to mind their own business while surfing social media platforms. Just because an individual maintains his/her profile in public mode, it doesn’t mean that they could be subjected to troll/criticisms/hatred. Comment your views on the way Sylviya handled the online user !!

Previous articleInternet Baffled After Man Tried To Insert His Pen*s Into His Girlfriend’s Ear!!
Next articleTamil Nadu Finance Minister PTR Explained Why He Replies To Online Trolls !!

The most awaited teaser of "Kaathuvaakula Rendu Kaadhal" got released on Friday evening with fans reacting to it in various ways. Starring Vijay Sethupathi,...

Vijay and director Atlee’s third collaboration, after the successful Theri and Mersal, has been titled Bigil (meaning ‘whistle’ in colloquial Tamil). Atlee released the...