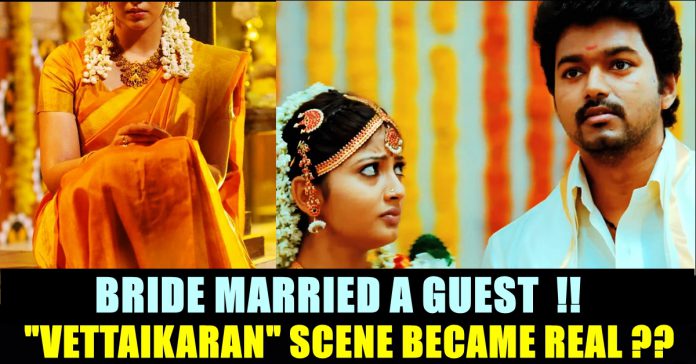 We all would have watched that one scene in a movie or in a Television serial where the bride would marry a complete stranger who came to the marriage as a guest due to circumstantial difficulties. After many serials and films, makers of 2009 action film Vettaikaaran would have parodied it by orchestrating a similar scene as well. Now, to our bizarre, a real life incident similar to those scenes had took place in our neighbour state Karnataka.

The incident was reported from a village in Tarikere Taluk of Chikkamagaluru district in Karnataka. Reports suggests that the groom who was supposed to marry the bride fled form his wedding avenue due to a problem caused by his girlfriend. The bride, without having no other choice, married a guest who was present at the event, says reports.

Ashok and Naveen, two brothers were scheduled to get married on Sunday at the same venue. Naveen and his bride Sindhu enjoyed their pre wedding rituals on Saturday. However, when the main day arrived, Naveen disappeared from the spot and left the bride and relatives in a shocked state.

It was revealed that Naveen’s girlfriend threatened him to drink poison in front of the guests to spoil the wedding. To prevent her from doing it, Naveen ran away and decided to meet in girlfriend in Tumakuru. He left Sinchu alone in the wedding hall who was supposed to become his wife in a matter of minutes, said reports.

Ashok, brother of Naveen tied knot with his bride and the family members of Sindhu couldn’t come out of the shock. It was reported that Sindhu left heartbroken and couldn’t be consoled which made the family to get her a groom then and there, Timesnow reported. While searching for a suitable groom for Sindhu in the wedding hall, they found one Chandrappa.

Chandrappa who is working as a BMTC conductor, agreed to marry Sindhu. He who was witnessing the series of dramatic incidents that took place in the marriage event, volunteered to marry Sindhu only with the permission of both the families.

Sindhu and Chandrappa took vows at the same venue and same day after the families accepted for their union. This news has made the netizens to reacts in various ways. A twitter user compared the real life incident with a comedy scene in Vijay” “Vettaikaaran” movie.

OK so the groom ran away… Hmmm no worries let’s see who’s on the bench.

Wish i was the guest there😊

Perks of being in a wedding

Nayanthara’s Fitting Reply To Trolls Which Said That She Faked Her Vaccination !!

After the pictures of Nayanthara getting vaccinated surfaced in Internet, a set of social media users came up with reactions wondering whether she actually...

RJ Vignesh Replied To Those Who Spewed Hatred At Him For His Statement On “Karuppar Kootam” !!

Comedy actor and youtube influencer RJ Vigneshkanth came up with a post saying that he never shied away to exhibit his devotion towards lord...