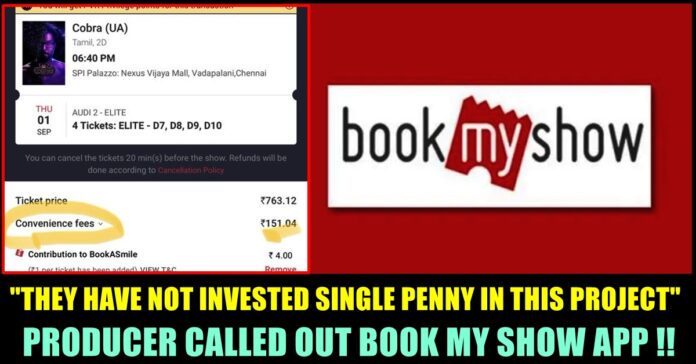 Movie Producer Vinod Kumar who is currently busy producing Vishal’s upcoming high budget film “Mark Antony”, called out “Book My Show” mobile application for charging 25% of the ticket amount without investing a single penny in the project. Uploading the screenshot which shows 4 tickets of “Cobra” being booked through the application, the film producer vented his frustration out through his official twitter handle.

Chiyaan Vikram’s most expected movie “Cobra” which is being made for the past 4 years, is getting released on the special occasion of “Vinayagar Chathurthi” that is 31st of August. Tickets are widely being booked for the as the film’s promotion went in full swing with the lead actor appearing in various cities along with the heroines of the film. Directed by Ajay Gnanamuthu of “Demonte Colony”, “Imaikka Nodigal” fame, the film’s music was composed by academy award winning musician A.R Rahman.

After booking four ticket for the film through “Book my show” app, producer Vinod Kumar who made “Action” with Vishal and Arya, uploaded a tweet calling out Book my show app for charging almost 25% of the entire ticket amount. In the screenshot added by him the ticket price was mentioned as Rs. 763 and Rs. 151 was charged for convenience fees.

“₹151 for no reason. Almost 25% of the ticket value is going to a third party who has no connection with the cinema. They have not invested a single penny in this project !” read the tweet of the film producer Check out his tweet below :

₹151 for no reason. Almost 25% of the ticket value is going to a third party who has no connection with the cinema. They have not invested a single penny in this project ! pic.twitter.com/GV9lnS7Iqu

Check out some of the other reactions that surfaced for the producer’s tweet :

Council take the money.. As usual Vishal spoke too much and then literally did nothing.. All these proposals came during producer councils strike against Qube, I don’t think he implemented even one proposal.. No idea why they went on a long strike then 2/2

No one will regulate these things, in chennai the normal theater ticket rate is 150 to 200. But for all top hero movies they charge 500 to 1500 in counter! No one will ask questions but blame ppl watching on telegram.i don’t support that but who will ask these questions

It’s not new it’s happening for so long. Atleast how many tickets we book the handling charge should be only one that should help. 60 rupees tickets most theatres say book online so the price comes to 💯 🤔😡🤬🤬🤬

Bro u being n flim fraternity can discuss this issue with respective team heads and complain Rte ?

govts can launch own website and collect less maintenance.
Win – Win for both ? https://t.co/hkPMvuL8tI

Rekha Nair, a close friend of VJ Chithu has appeared in an interaction with a popular youtube channel and stated bold opinions regarding the...