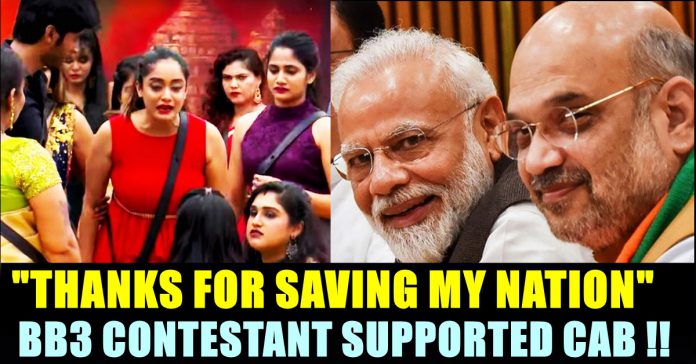 So far, It has been reported that at least 18 people died in the protest conducted to oppose CAB act and thousands of people were arrested. In Tamilnadu, except ADMK, almost every leading parties are opposing the event. Meanwhile, actress and Model Meera Mithun who is known among Tamil people for participating in season 3 of Bigg Boss show has stretched her support for the decision took by Modi government.

Unlike others, Meera Mithun, in her video said that she believes the law to keep our country away from terrorism. “I personally support this. Mr. Modi ji incorporated a very good act to save our nation from terrorism. Amit Shah and Modi ji are actually doing a very great job. More power to you people. I support Modi ji for fighting for our nation.” said Meera Mithun who expressed her support to NRC as well. She requested Modiji to set the police department right to avoid the ruckus that is taking place.

“We are trying to make India free of terrorism. We are trying to make India more secure. We might not understand the importance of it right now. But we will come to realize it in future. The police department should actually be supportive and make sure that public is not getting into too much danger because of the political parties who are creating agitation purposefully” she said in her video.

Watch the videos she posted below :

Good things are never welcomed at first but realized after a decade. Power of ur CAA and it's efficacy will be known in future. You are always right @narendramodi and that's why your our @PMOIndia . You inspire me 💪
Late CM Jayalalithaa Amma would have supported you for the same pic.twitter.com/xmesH9P3Oy

If you are aware of Bigg Boss show’s third season in Tamil, you must have known about Meera Mithun , one of the most controversial participant of the show. So far Meera Mithun accused almost every housemate who participated along with her in the reality game show. To an extent, she even accused Kamal Haasan, the host of Bigg Boss Tamil by saying that he used his influence to remove her from Agni Siragugal movie to cast his daughter Akshara Haasan.

What do you think on this stand of the model and aspiring actress ?? Comment your views below !!

Previous articleSiddharth’s Fitting Reply To BJP Guy Who Accused Him !!
Next articleTamilnadu Theatres To Face Shut Down Because Of This !!