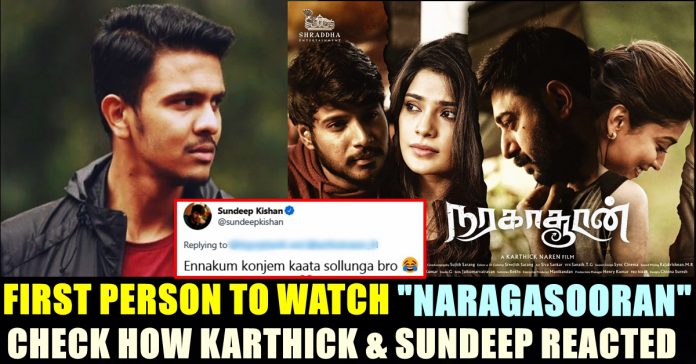 Director Karthick Naren’s unreleased film “Naragasooran” which was highly anticipated to be released as his second film, is yet to see the light. However, The 25 year old filmmaker managed to direct “Mafia Chapter 1” by having Arun Vijay and Prasanna in the lead roles. The film which completed its theatrical run is currently streaming in Amazon Prime. Now, popular movie reviewer Prashanth, posted a tweet saying that he watched the unreleased “Naragasooran” and expressed his opinions.

The film “Naragasooran” which has Aravind Swamy, Sundeep Kishan, Shreya in the lead roles caught into controversy due to the rift between Director Gautham Vasudev Menon and Karthick Naren. Gautham was supposed to produce the film initially. The film’s trailer was released on August, 2018 but the makers couldn’t release the film in theatres for unknown reasons.

Now, Reviewer Prashanth said that he watched the film with some special permission from Karthick Naren and team. “Such an engaging thriller that just takes you on this roller coaster journey of emotions!! D16 magic repeated big time!!” he shared his opinion about the movie through these words.

Had a chance to watch #naragasooran (Thanks to technology ) With some special permissions from @karthicknaren_M and team!

Such an engaging thriller that just takes you on this roller coaster journey of emotions!! D16 magic repeated big time!!

On seeing this tweet from Prashanth, Karthick thanked Prashanth by writing “Thank you na” and surprisingly, one of the lead, Sundeep Kishan requested Prashanth to ask Karthick to show the film to him as well. “Ennakum konjem kaata sollunga bro” Sundeep’s reply read.

Regarding the release, few days ago Karthick confronted Gautham Menon in one of his tweet about his upcoming project. “Some clarity on when this is gonna see the light of the day will be really helpful sir. And yes, this film is very very close to my heart!” said Karthick in his reply comment of Gautham’s Dhruva Nakshathrangal post.

Some clarity on when this is gonna see the light of the day will be really helpful sir. And yes, this film is very very close to my heart! pic.twitter.com/1eFoEFub3u

Director Karthick Naren who is just two films old, has already won many hearts of the cinema fans as his first film exceeded its expectations. Meanwhile he is committed to direct actor Dhanush’s 43rd film under Sathyajothi films. The music of the film is going to be composed by GV Prakash and the filmmaker is working hard with two prominent writers of Malayalam film industry to finish the pre production of the film.

Let us wish “Naragsooran” to hit the screens soon and experience what Prashanth said.

Previous articleWoman Decoded The Announcement Of Modi !! Check How
Next articleWhy Nayanthara Is Trending At This Time !!