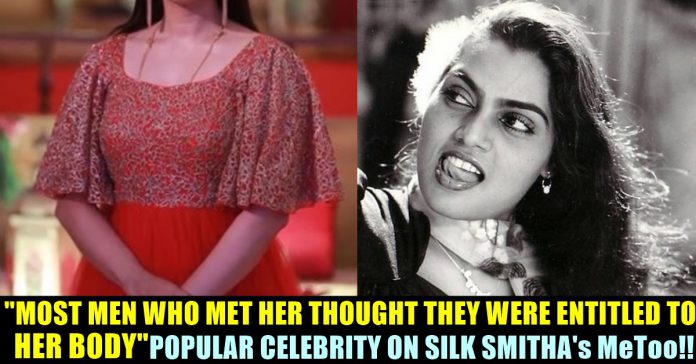 Chinmayi Sripaada recently responded to a Silk Smitha post. Many men would have thought they were entitled to Silk Smitha’s body, according to Chinmayi’s narrative.

Supportive of women to voice out their harassments, Chinmayi has shared a post on Silk Smitha and has spoken about it. Silk Smitha aka Vijayalakshmi Vadlapatla, the glamorous mogul has been shaded with different colors by the people. She had an appealing and alluring beauty. She was a dream girl of the youth of the time. ‘Dirty Picture’, a biographical movie of Silk Smitha, starring Vidya Balan was released posthumously. Silk Smitha had a hard life and struggled all the way through her journey. Also acting in movies, seductive roles and songs have gained her more fans. The eximious actress committed suicide.

The Print, a news and media website, on their Instagram account, theprintindia, have posted a post to commemorate the death anniversary of Silk Smitha. In the post, they have described how proud Silk Smitha was about her sexuality. They have also mentioned how she was put into a tough situation for being unapologetically her.

Singer Chinmayi had posted it in her story with her opinion on how things would have been if there was a #MeToo movement in her times. She has put forward that, if someone wants to be an actress, they must be willing to put up with the sex-related nonsense that guys come with. Through which she means to say the fact that women come to work and act and not to be forced to have sex with random jerks.

Actor Thavasi who is known for appearing in Sivakarthikeyan's "Varuthapadatha Valibar Sangam" as a fake astrologer, has been combating cancer and actors of Tamil...